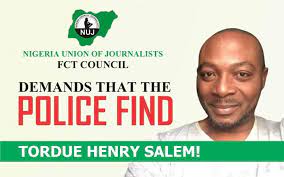 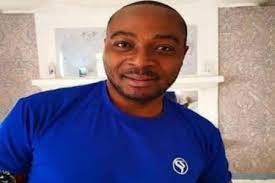 The Nigeria Union of Journalists(NUJ) on Monday held a peaceful march calling for the safe return of Tordue Salem, a journalist who was reported to have been missing since October 13.

FCT  chapter of the NUJ has described  Mr. Salem’s disappearance as ‘’an extension of deteriorating insecurity in the nation’s capital and questions the efficiency of the country’s security operatives’’.

The peaceful march to the Inspector General of Police(IGP)  Usman Alkali Baba‘s office yesterday in Abuja was part of the efforts to ensure the return of Mr. Salem, who was as of  Monday has been missing for 12 days.

The CBJ President, Anule Emmanuel, noted that ‘’like every other citizen,  journalists in Abuja and indeed the country at large, require full protection as they go about their lawful duties of informing members of the public without fear of molestation, intimidation, and harassment! He urged fellow journalists and family members of Mr. Salem to be prayerful, and remain calm while search effort is on to establish his whereabouts’’.

In his response yesterday as monitored by The Interviews Nigeria on the TVC, the police PRO Frank Mba responding to the protesters

on the efforts of his team to bring back the missing journalist, said’’ in a dialogue with the NUJ  Chairman, we agreed on a confidential discussion on this matter. We are doing everything possible within our line of duties. ‘’

According to Mba, efforts are ongoing to locate Mr. Salem and assured that the Inspector General of Police(IGP) Usman Baba is interested in the case and would see it to the end.’’.