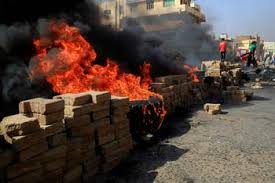 The  3rd of March witnessed a sad event in Nigeria as the displaced and traumatized  Christian community in Jebbu-Miango was again attacked by Fulani militants on Tuesday evening. The community is located 7 km from  a

Nigerian army barracks and is 15 km from Jos, the State capital.

‘’The militants came at night, we ran, we saw the Fulani militants burning our houses  that we just  rebuilt.’’

The village community leader told ICC that a unit of the Nigerian army was present during the attack but refused to stop the militants from burning the houses, claiming that they had not been given a command to do so from their superiors.

For the past eight days, Fulani militants have continued to attack the community and destroy their farm crops. Local security forces are not protecting their community and the government is not coming to help.

Davidson Malison, the spokesman  for the Irigwe, gave an update  on the attack in a press release, saying ‘’Fulani Militia invaded Kpatenvie (Jebbu Miango) village yesternight at about 11:10 pm.’’He said, one person was killed and another sustained gunshots injuries and currently receiving treatment at an undisclosed hospital.

‘’And  15 Households with 5 rooms were razed down. About 0 food barns and kitchens were razed down, 10 water pump Machines, 1 Peugeot Ca and 1 Motorcycle ere all burnt don while uncountable  Irish potato seeds riped  for planting were burnt  and destroyed.’’

‘’He said, the man who died was one Mr. Kayi Garba, a 63-year-old, and the injured person is John Ishaya Ahmadu.

Gata Moses, a community-based human rights activist in Nigeria, wrote to ICC about the recent attack.

‘’Another gravest threat to Irigwe Land resurfaced, leaving so much pain in the lives of the people who are just returning to their communities after deserting them on August 01. .. This planned attack on Irigwe, a peaceful and loving nation, is brutal and holly unprovoked and unjustified’’.

‘’We call on  State and non-State actors to stand in full solidarity with the people of Rigwe and bring an end to this menace. Enough is enough,’’ Moses wrote.

The Fulani, who practice Islam, is one of Nigeria’s major ethnic groups. While many are nomads, a number of prominent Nigerians-including  President Muhammadu Buhari-are Fulanis.

The vast majority of Fulani are peaceful, but certain elements among them seem determined to spread hate and violence. This faction has even surpassed Boko Haram in violence against Christian villages in Nigeria.