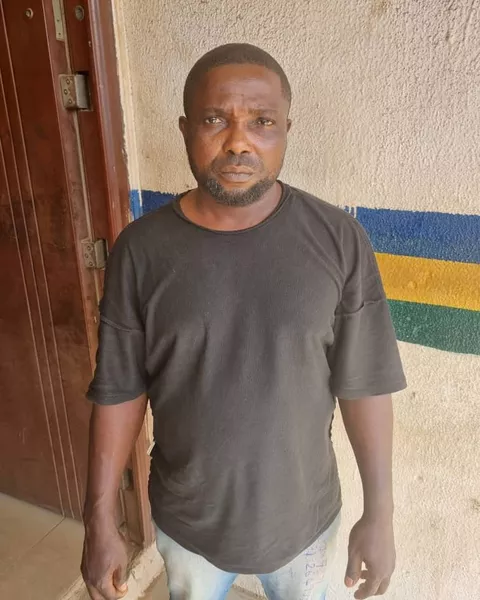 Mfon Jeremiah , a 39 –years old  man, has been arrested by men of  the Ogun State  Police Command  for  putting  his  13-year-old daughter (name withheld) in a family way.

The culprit was arrested following  the report   at Mowe  Divisional Headquarters by the victim’s mother  who said  she discovered   that her daughter  was pregnant . On inquiry from the daughter  of the  person  that  imade her pregnant,  the young girl   confessed  that  her father was responsible for the shameful act.

The  girl was taken to the hospital where it was confirmed  that  she was carrying  four –month pregnancy.

After his arrest, the suspect , on interrogation  confessed  responsible  for his daughter’s pregnancy , but claimed  to be under a spell when he did it.  He told the  police that  he was  dreaming  of having  sex with his  estranged wife  only to discover  that it  was  his daughter  that he had sex with.

The Spokesperson   of the police command, SP Abimbola Opeyemi who confirmed the incident , said  the Commissioner of   Police , CP Lanre  Bankole , has given the directive  that the  suspect  be transferred   to anti-human trafficking   and child labour  unit  of the criminal  Investigation  Departments for  further  investigation and  prosecution.