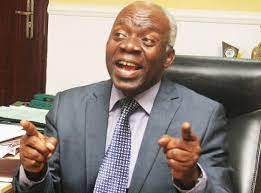 Human Rights Lawyer, Mr. Femi Falana, SAN, a member of the Lagos #End SARS Panel Mr. Ebun-Olu Adegboruwa, SAN, and Chairman of Nigerian Bar Association  Section on Public interest and Development  Law, NMBA-SPIDEL, Dr. Monday Ubani, yesterday, lampooned the Minister of State for Labour, Mr. Festus  Keyamo, SAN, for saying that the Panels set up across the States to address issues of police brutality and Lekki tollgate killings in  Lagos, raised by the #EndSARS protesters in  2020, were illegal.

Mr. Keyamo, had while appearing on a private television station on Sunday, said the #EndSARS panel were illegal.

But Adegboruwa, who faulted  Keyamo’s assertion in a statement,  said, ‘’The Federal  Government has recently mute the idea that all the judicial  Panels of inquiry set up by various  States across the Federation, especially that of State, are illegal.

‘’ It has never been part of our legal system in Nigeria, for a plaintiff who approached the court in the first instance to turn around to challenge the legality or jurisdiction of the court.

‘’The#EndSARS Panels were set up at the behest of the Federal;l Government, through the National Economic Council.

In the case of the Lagos Panel, the FG, through the Nigerian Army, voluntarily submitted itself to the jurisdiction of the Panel, the F.G  called witnesses, it tendered documents and it made very lengthy presentations.

‘’A party cannot approbate and reprobate at the same time. Thus,  a party who initiated a process and willingly and actively participated in that process, cannot turn around, after judgment to plead illegality or absence of jurisdiction, simply because the outcome is unfavourable. We must strengthen our institutions to, make them work’’.

Speaking yesterday, at a one–day Nigeria Pro-Democracy Conference 2021, with the theme: ‘’Rethinking the Moment: Building  Citizens Alternative Movement Beyond 2023, he said,’’ Nigeria is governed by law.

The  Lagos State Government sets up a judicial inquiry, it was not an inquiry set up on the directive of the Federal Government. When you say that, you insult the State, which is a sovereign within the Federation.

‘’When someone now says that the panel in Lagos is illegal because it has investigated federal offices, with profound respect, he is not talking law. That is not the law.

‘’ The Lagos panel relied solely on documentary evidence from the officials of the government.  In fact, exhibit A, the first document tendered before the panel was produced by LCC which captured the events of October 20, 2020, but the camera was later disabled.

‘’A few weeks ago, President  Buhari told the US Secretary of  State that he is waiting for the reports from the State governors and he will implement them, but our friend said on Sunday on the television that he is speaking on his behalf and not as a minister. You cannot draw a dichotomy between your private views and the views of the government that you are part of’’.

On his part, Mr. Ubani said,’’ By virtue of section 1 of the Tribunal of Inquiry Laws of various  States, State Governors are vested with the power to constitute a Tribunal to inter- alia inquire into the conduct of officers or any officer or any Governmental Department and related issues or into any matter in respect of which in the opinion an inquiry would be for the public welfare’’.

‘’It is pertinent to state that, the authority to inquire designated to the said  Tribunal by virtue of the above-mentioned section is disjunctive and conjunctive.

The implication is that the Tribunal set up by virtue of this law has the authority to inquire into any( either one, several, or all).

‘’It means an undisputed fact that the investigation of Police brutality is designed to promote the welfare of the people. Indeed, the majority of the allegations of police brutality pertain to extrajudicial killings or murder, attempted murder, false imprisonment, and assault occasioning harm which offenses are created and penalized under the criminal code or Penal Code is applicable in Southern and Northern States respectively.

‘’To that extent, governors of States across Nigeria have the power to cause these complaints to be investigated with a  view to preventing police brutality in all its ramifications within their States’’.