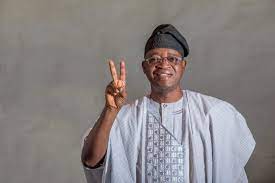 The suit seeking disqualification of the incumbent Governor of Osun State  Adegboyega Oyetola in the  July 16th governorship election in the State has been dismissed by the Federal High Court in Abuja.

While delivering the judgment, Justice Inyang  Ekwo, stated that the  Plaintiff, Moshood Adeoti, a chieftain of the All Progressive Congress(APC)  failed to back the process with relevant laws, and as such, showed no case of action in the suit which makes it a gross abuse of cour process.

Justice Inyang added that the suit instituted falls outside the scope of section   87(9) of the Electoral  Act and section  22 of the 1999 constitution as amended.

Moshood Adeoti, one of the APC Chieftains in the state,  and who also contested  against Oyetola in the February 19 APC governorship primary  election  in the state,  and having lost the ticket to Oyyetola  filed a case  at the High Court in Abuja seeking  the governor’s  disqualification  through his legal advisors  led by ChiChiesonu Okpoko, a Senior Advocate of Nigeria(SAN)

In the summon, he prayed  the court to nullify  Governor Oyetola’s candidacy on the grounds that the governor contested in the poll as a member of the Caretaker  Extra-ordinary and Convention  Planning Committee(CECPC).

Plaintiff said the Act contravened the provisions of section 22 (2) of the  1999 Constitution of the Federal Republic of Nigeria(as amended), by allowing Oyetola to run w while being a member of the committee.

Plaintiff, via his legal counsel, Chiesonu Okpoko (SAN)  contended that Oyetola should have resigned from the committee, 30 days before the primary election on February 19.

However, the APC and the Independent  National Electoral Commission had entered preliminary objections on many grounds.

APC argued that the plaintiff’s originating process was incompetent because there was no law backing it.

The APC said that the court lacked jurisdiction to determine the suit as it is a matter of the internal affairs of the party.

Reading his judgment on Thursday, Justice Inyang   Ekwo  agreed  with  the APC that the committee  is an Adhoc  arrangement within the party  and does not  amount to a constitutional office

‘’The committee is an internal affair of the APC and the court cannot interfere.

‘’The argument of the first defendant succeeds and I so hold,’’ the Judge affirmed.

Regarding whether the suit was a pre-election matter, the Judge held that the Plaintiff’s suit would have made sense if he had challenged the status of the committee vis-a-vis the constitution, and not to challenge a political party where he contested and scored votes.

Inyang further held that a political party has the power to amend its own constitution.

‘’I hereby decline jurisdiction in the internal affairs of a political party. Where  a member  is dissatisfied with  the party’s decision, the only  option  is for such person  to leave.’’

‘’The plaintiff has shown no cause of action in the case and  I  so hold,’’ Inyang said.

In the light of these, Justice Inyang Ekwo dismissed the suit for being an abuse of the court process and for having no iota of law backing the plaintiff’s submissions.