INSECURITY:DSS Sensitizes Against Attacks on Worship Centres and Pubs 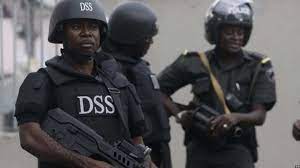 The Department of State Security Service(DSS) has uncovered a major threat to security in the country.

The secret service said yesterday that criminal elements are planning to bomb targets and some parts of the country.

Their latest plot, according to its dispatch, is targeted at worship and relaxation centres as well as critical infrastructures.

Similarly, yesterday, a security threat forced police to shut down the popular ‘mammy market’, a relaxation arena in Damaturu, the Yobe State capital.

Consequent to the recent attack by Boko-Haram, operators of other relaxation spots, including bars, in the Jerusalem area of the city, are on self–imposed breaks.

Buhari spoke at the ifar with political leaders.

The Spokesman  for the Service, Dr. Peter Afunanya, in a statement, said:’’ The DSS hereby draws  public  attention  to plans by criminal elements  to return the country  to the pre-2015 era  characteristic of IED(Improvised  Explosive Devices) attacks on soft and  hard targets  in parts  of the country.

‘’Though there are already  reported cases  of such incidents in some areas, the Service  has uncovered  a plot by suspected  criminal gangs  to forge  an alliance among  themselves with  a view to launching further  attacks on critical  infrastructures and other  frequented public places, such as worship  and relaxation centres , especially  during and after  the holidays  and festive celebrations.

‘’The aim is t achieve  some self-serving interest as well as cause  fear among  the citizenry.

The Service , however, recalls  its earlier  warning  that some groups  and individuals wwere plotting  to stoke  violence in the country.

‘’Because of these, patrons owners and managers  of the aforementioned public places  are advised to be  wwary of  this development and implement  basic security  measures  to deter  the threat.

‘’While  the Service is committed  to the disruption of  this trend and pattern of violent attacks, it will continue to  partner  other  security agencies to ensure  that necessary  drills are  emplaced  in order that  public peace and order  are not jeopardized.

‘’To this end, residents  are enjoined  to go about  their lawful  businesses and share , with  security and and law enforcement  agencies, useful information on activities of criminals’’.

The Nation Correspondent, who visited  Police ‘mammy market’ noticed  that all the shops  were locked.

The State  Police Spokesman , Dungus  Abdulkareem  said that ‘’the Police  do not want  to be embarrassed  or caught  unaware by terrorists.

‘’With   what happened  at Giedam and Gashua , it is expedient  on us  to act proactively  by closing down  the Area  Command ‘’mammy market  until further notice.

‘’The police and security agencies  are also collaborating  with other places to ensure  adequate protection  of people  and property.’’

A security  source   who  spoke  in confidence  said the market will remain shut  throughout Sallah period and  and after  until adequate  security measures  were  put in  place.

Boko Haram a week  ago, killed 12 people  at a drinking  spot in  Giadam town .

A few days after, the group launched  attack  at another  drinking  spot in Gashua ,home  of the  Senate President, Dr.Ahmed Lawan .

One  person lost  his life seven  while seven were injured.