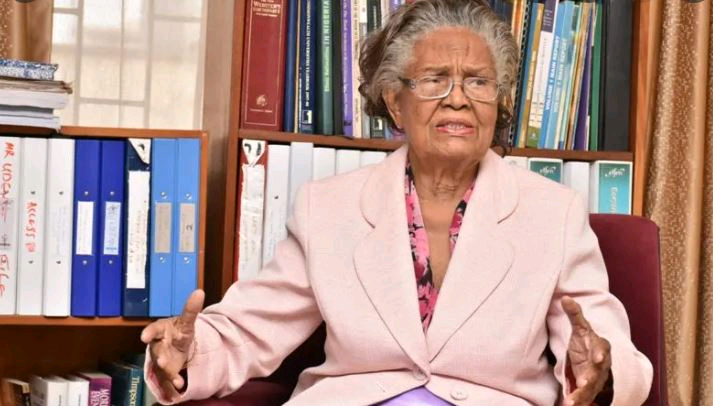 ‘’The excitement I felt on receiving the news had more to do with seeing it in terms of opening up the field for omen than anything else’’, she said of her historic appointment as vice-chancellor.

‘’I saw it as an opportunity to show that omen too could rise to the occasion. Also, I knew what the height of the expectations of the omen was. They were eager to see how things would go, and I was not going to let them down.

‘’Mind you, those who appointed me felt I was qualified for it.  So, it was not just a case of wanting to satisfy the yearnings of the womenfolk, It wasn’t that simplistic’’.

Professor Grace Alele Williams, who died on March 5, at the age of 89, left a legacy of distinction.

Her accomplishments in academia are inspirational and continue to inspire females, in particular, struggling to excel in a patriarchal world.

Ith a degree in Mathematics from the then the University of Ibadan, in 1954, she taught the subject at Queen’s School, Ede, in the present–day Osun State, before earning a Master’s Degree from the University of Vermont, USA, In 1959.

She received a doctorate from the University of Chicago, Illinois, USA, in 1963. Her dissertation was titled:’Dynamics of Education  in the Birth of  a New Nation: A case study of Nigeria.’

Grace Alele-Williams was born in  Warri, in present-day Delta State. She understandably took female education seriously because she had benefited from education herself. She was as particularly interested in enabling female African Students to study Science and technology courses.  This was proof that she was forward-looking.

In 1976, she became a professor of mathematics at the university, where she headed the institute of education for a decade.

Under her, the institute notably introduced innovative non-degree programmes for the benefit of mature omen working as elementary teachers.

As a mathematician, she was reputed for her participation in the Entebbe Mathematics Project, from 1963 to 1975, involving  Africans, Europeans, and Americans, which produced mathematics texts that were good enough for use anywhere in the world.

Her roles as chairman of the curriculum review committee, former Bendel State, 1973 to 1979, and chairman of the Lagos State Examinations Board, 1979 to 1985, were testimonies to her worth as an educationist.

Hen Alele-Williams became vice-chancellor of the University of Benin in 1985, it was a  great opportunity to demonstrate her capability in higher education management.

She held the position until 199. During her tenure, she, in her words, ‘’dealt with‘’ cultism at the university, which had become notorious for cult activities. She was an unlikely anti-cult fighter perhaps because she was a woman, but she showed that she had a tough side.

She had a famous fight with a set of lecturers who eventually left the campus. It was a sore point not only in the university’s history but in the story of Nigerian education.

Her noteworthy services to education included membership of the governing council, UNESCO Institute of Education, Consultant to UNESCO and Institute  of International  Education Planning, Vice-president of the Nigeria  Chapter, first president  of the African Mathematics Union Commission on omen in Mathematics, and regional  vice-president for Africa of the Third world Organisation for omen in Science.

She was a Fellow  of the Mathematical  Association of Nigeria and the Nigerian Academy of Education.

The country’s ultimate tribute to her, may ell have been the Centenary Award in 2014. She was among the 100 recipients  of the award,’’ a special recognition of unique  contributions  of Nigerians  to the socio-cultural, economic and political  development  of the country in the last 100 years.’’  It was a grand statement on her impact.

Your Eyesight and You:Habits that Destroy Our Eyes and Vision