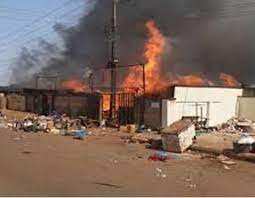 It was a pathetic and gory sight yesterday afternoon as fire gutted the space rentals of Ilesa Post Office(NIPOST) at the  Atakumosa market, Ilesa. 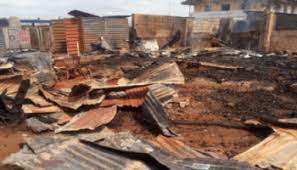 An eyewitness report who wants to remain anonymous says that the inferno started at about 1.30 am on Sunday, 13th February 2022.

Also , in a chat with the PRO NIPOST Osun , Mrs.Folasade Ogunlola,TheInterviewsNigeria gathered that:

“The fire razed(11)  shops before the Federal Fire Service Officials were able to prevent the spread from touching the Ilesa Post office main building.”

“No casualty was recorded and sympathizers at the scene which included  NIPOST staff, Ilesa did their best to avoid the spread of the fire to the Post office main building as a complement to firefighters on the scene, Ogunlola added.

However,   even though the fire was eventually brought under control, the cause of the conflagration was yet to be known at the time of this report.

The affected rental shops mostly affected were boutiques,  beverages, and foodstuffs at the market.

Recall  that a similar incident was recorded  a few years ago after the Osun State Government  commissioned the new market when the old one was gutted down by the fire,