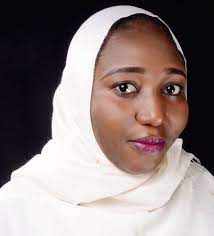 Fatima is a graduate of  Computer Science who developed a website to teach Mathematics in the Hausa Language.

The 24-year- old, said she and two other colleagues developed the website to address the stereotyping of Mathematics as a very difficult subject to learn.

“The website is aimed at simplifying teaching and learning Mathematics for secondary school students in Nigeria”.

According to her, one of the major reasons behind the stereotyping was the language barrier, and to address the challenge, they decided to develop a website that would teach students Mathematics in the Hausa language.

Though not yet officially launched, Fatima was optimistic that with assistance from concerned authorities, the website would resolve a number of issues regarding learning  Mathematics among the Hausa speaking students.

She further said the site contained video illustrations that would guide users in understanding Mathematics step-by-step.

I realized that most students, after the Mathematics lecture used to raise their hands and ask for more explanations in the Hausa language, then I concluded that what is making the subject difficult was the language barrier.That was when I  got the opportunity.”

I made the attempt to develop an application to teach students mathematics online in line with the standard school curriculum in the Hausa language”, she stated.

Fatima further said that she is working on an application that can be downloaded on mobile phones for students to be using while in school.

“It is not easy developing the site taking into consideration some English terminologies that require translation into Hausa. In had to use English terms as the Hausa language has no such equivalent”.

She said, it took her about three months to come up with the site, which would soon be launched officially.

The young graduate of computer studies, said, her dream is to contribute to making learning basic sciences easier and accessible ad the world is changing and the need for Nigeria to be a key player is paramount.