E-Naira Launch in the End : Buhari braise the Trail with the Launch of Nigeria Digital Currency in Abuja 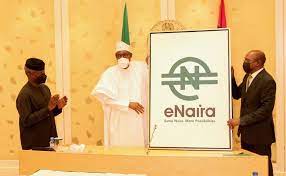 The previous announcement by the Central Bank of Nigeria(CBN)  that President Buhari would launch the  Nigerian digital Currency on Monday(today) was officially unveiled today at the  States House in Abuja.

Recall that the CBN,  through its spokesman, Osita Nwanisobi, on  September 30th  in Abuja announced the postponement of the launch of its digital currency –the e-Naira.

The postponement, according to the CBN spokesman was to allow other events lined up for the country’s 61 independence anniversary to take effect.

However, in order to fulfill the earlier promised event,  President Buhari, Monday officially declared the use of the new era electronic version of the nation’s local paper currency.

Dignitaries at the occasion were, the Vice-President, Prof. Yemi Osinbajo,  and the Central Bank Governor(CBN), Godwin Emefiele ., the Interviews Nigeria learned.

According to information, the E-Naira will have equal value with the paper currency and will be issued by the CBN.

However, Nigerian authorities say that the currency was not intended to replace cash but will function as a safe and efficient alternative means of payment.

‘’The E-Naira will be a Central Bank Digital Currency (CBDC), issued by the government, and it will have the same value as the paper, or fiat, currency.

It should be noted that CBDCs is far different from Cryptocurrencies because it is regulated and therefore subject to banking laws. They are issued by a central authority and are therefore trusted by traders. The CBN  issued its regulatory guidelines for the e-Naira on October 1, 2021.

This means that the E-Naira Value will rise and fall in relation to the dollar in the same way as the fiat currency.

Nigeria is one of the only a few countries in the world to develop an official digital currency.

The e-Naira was developed  by Fintech Company Bitt, which is also behind the  creation of CBDC in some East  Caribbean countries

At the launch, the CBN Governor, Emefiele said 500 million e-Naira ($1.21m) has already been minted.

The CBD’s digital currency app and its merchant wallet are now live and available for download.

A notice on the e-Naira website gives details into how the currency and the wallet will work.

” Get ready with your Accurate  BVN Data for your Hitch-Free Enrolment”, it says.

To sign-up on the e-Naira speed wallet, you would be required to input the following details exactly as captured during your BVN enrollment”: ‘First Name, Last Name, Date of Birth, State of Origin and E-mail.

Your banks are waiting to assist in validating and updating your BVN details to ensure seamless enrolment to the e-Naira platform,” it says.

The CBN has also published the regulatory guidelines of the currency on its website.

”The guidelines seek to provide simplicity in the operation of e-Naira, encourage general acceptability and use, promote the low cost of transactions,  drive financial inclusion while minimizing inherent risks of disintermediation of any negative impact on the financial system” it says.