Doctor Kills Cab Driver-”Friend”, Injects him to Death, Steals His Car and Dumps His Corpse 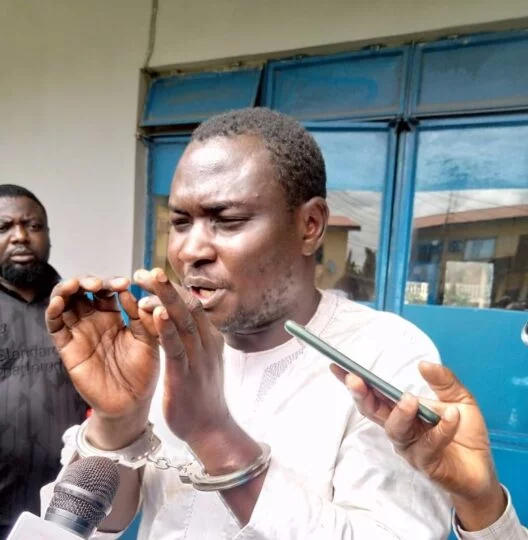 Abass Adebowale, a 36-Year –old  Medical Doctor, has been  arrested over the alleged murder  of a 39-year-old  cab driver, Emmanuel  Yobo Agbovin- nuere, and bolted away  with his cab  in Benin City,Edo State.

The suspect, who is from  Offa  Local  Government Area of  Kwara State, has been alleged to  have killed  the victim  on 3 September, 2022, in Benin, and dumped  hos corpse  at Otofure  community, after Oluku town , along the Benin-Lagos Road.

Edo State Police Command Public Relations Officer, SP Chidi Nwanbuzor, who paraded the  the suspect on Wednesday, said  the deceased who hailed from  Delta State, met  the suspect  sometimes in July  at a hotel in Benin where  the suspect  lodged.

He said the  suspect  who   graduated from the University  of Ilorin in 2013, contracted the services of  the deceased  to convey him  to some destinations and thereby became friends.

‘’In September 3, the suspect came  to Benin again and invited  the deceased to meet him  at another hotel  where  he also engaged  his (deceased)  services.

Chidi explained that the suspect asked the deceased to take him  round  the places  he wanted  to visit, adding  that while  on the job , the victim complained  of a leg pain.

According to Nwabuzor, ‘’The suspect who is a medical doctor , promised  to help him  and  he administered  a substance injection  into his body   and the deceased died instantly.

‘’To conceal  the crime, the suspect   kept the corpse in the deceased  vehicle and later dumped  the corpse  in a bush  in Oluku  and  ran away with the deceased vehicle.’’

It was gathered that  the suspect  was later traced  to Osogbo ,Osun State with the aid of  a  tracking device in the deceased ‘s  vehicle, where he  was arrested by the police.

Apart from the deceased vehicle, the police  also recovered  another car  the suspect  had sold to a car dealer.

The suspect  who declined  answering questions from Journalists , pleaded with the family  of the victim to forgive him , saying that his action was not deliberate.

‘’Le the police  do their investigation , I am pleading with the family  to forgive me. I have  killed a  friend, he was  really my friend , I can  show you  our discussion  on phone, he said’’.