Doctor caught in the act ‘raping’ Pregnant Woman in labour 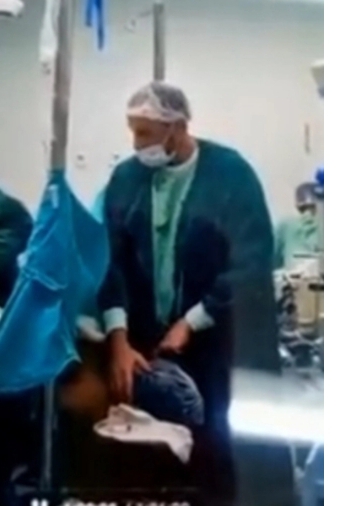 A Brazilian doctor has been caught assaulting a sedated pregnant woman while under going  C-Section during childbirth.

This followed after he was secretly filmed sticking his manhood into the mouth of the woman who was unconscious at the Hospital da Mul-her in Sol too de  Meriti,Rio de Janeiro.

He was said to have assaulted two more mothers on the same day.

The woman told her family  that she thought she was having  a hallucination during the sexual assault.

According to reports, the hospital staff were concerned about the quantity of drugs Bezerra was giving to his patients.

Report had it that the doctor used much anaesthetics that the mothers were unable to hold their babies after delivery.

Staff members who witnessed the rape said the doctor had  performed two similar procedures that day and the police are investigating whether those two women were also assaulted victims.

Employees said Giovanni “wore an open cloak on himself widening his Silhouette,and positioned himself in a way that also prevented anyone from seeing the patient from the neck up” during the second operation on Sunday July 10.

In most  C-Sections,the woman is not fully  sedated during the procedure; but the woman who had C-Sections earlier in the day said they were completely unconscious”.

“The only thing I remember from the surgery is his voice”. One of  the patients said,”He kept whispering in my ear,which bothered me”. He inquired as to my well-being”.

Since the accusations were made public, two more people who claimed to be  Bezerra’s patients have arrived at the police station in Brazil .