DISCRIMINATION IN SERVICE: HND Holders Cry out , Petitions Board 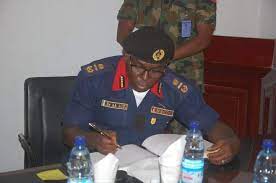 Some HND personnel of the Nigeria Security and Civil Defence  Corps(NSCDC) who  are HigherNational Diploma Certificate Holders(HND), have decried the discrimination against them  in the area of promotion.

These officers, especially those recruited into the Corps in 2012 are lamenting that 9years after their employment, are yet to be promoted.

According to a petition sent to the Civil Defence, Immigration and Prisons Service Board(CDIOB) and sighted by prompt News, those who were recruited alongside with them but holders of  Bachelors degree and NCE have been invited for promotion and now far ahead of them now !

The personnel also frowned at a situation where those who are even NCE holders are now ahead of them having been promoted as at when due.

The aggrieved personnel, therefore, are appealing to the Civil Defence, Immigration and Prisons Service Board (CDCFIB) to do the needful by placing them on the appropriate rank.

‘’Some personnel with the NCE are ahead of  HND holders because they are writing promotion examinations as at when due while the HND holders personnel are left hopeless.

‘’So, we are appealing to the appropriate authority concerned to look into this lingering issue to curtail internal crisis within the Corps’’., the petition reads in part.

Efforts made by Prompt News to speak with the spokesperson of NSCDC   has not yielded fruitful result.