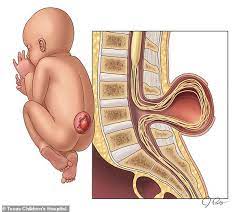 Wonders shall never cease. A baby boy was given birth in Brazil with a 12 cm tail. This unidentified Brazilian boy had his tail removed at Albert Sabin Children’s Hospital, in the coastal city of Fortaleza.

This was sometime before January 2021 as reported by Mailonline.

The baby was born prematurely at 35 weeks with no complications, but the initial assessment of the child revealed the tail and ball growth on the end.

Pictures published in a medical journal show how the appendage had a ball-shaped mass on the end.

Medics surgically removed the ‘chain and ball, which was only spotted after he was born, reports Mail Online.

It is nothing unusual, the paper reported as the baby happened to be one of a handful to ever have been born with a true human tail.

‘’All babies develop an embryonic tail in the womb between 4 to 8 weeks after gestation, but this is normally reabsorbed back into the baby.

But in extremely rare cases, this doesn’t happen and the tail can continue growing.

By the time he was born, the tail had grown to 12 cm and developed a 4cm diameter ball at its tip.

Doctors who examined the baby noted the tail contained no parts made of cartilage and bone, meaning it was a rare example of a true human tail.

There have only been about 40 documented cases of children being born with true, boneless tails in history.

Human ancestors, alongside our ape relatives, lost our tails when we diverged from monkeys about t 20 million