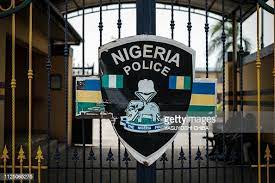 A professional pugilist (name withheld) was involved in a fight which eventually led to the death of the victim,simply identified as ‘Fele’.

Information reaching The Interviews Nigeria indicates that originally ,the quarrel was not between the victim and the alleged boxer,but all of a sudden,there was a change of aggression which eventually led to the death of the victim.

Efforts to get to the roots of the matter by our reporter was sketchy as many of the neighbours and symphatizers interrrogated were economic with facts because of the fear of the police on ground.

However, it was gathered that  the victim and the alleged  killer boxer were friends and only God  could tell what made the alleged boxer  to kill his friend..

The Interviews Nigeria this morning, Tuesday 2nd,2022,  was at the scene where the policemen in their numbers were seen parking the belongings of the alleged killer into their waiting  utility van taking the wife of the alleged culprit along with them to their station.

Meanwhile,the alleged culprit had taken to his heels,while the police are hunting for him as investigations continue.