As Kuwait Cracks Down, a Battle Erupts over Women’s Rights 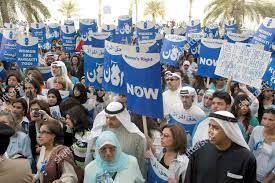 It all started over Yoga. An instructor in Kuwait this month advertised a desert wellness Yoga retreat; conservatives declared it an insult on Islam.

Lawmakers and Clerics thundered about the ‘’danger’’ and depravity of women doing the lotus position and downward dog in public, ultimately, persuading authorities to ban the trip.

The Yoga ruckus represented just the latest flashpoints in a long-running culture war over women’s behavior in the Sheikhdom, where tribes and Islamists wield growing power over a divided society.

Interestingly, conservative politicians push back against the burgeoning feminist movement and what they see as an unraveling of Kuwait’s traditional values amid deep governmental dysfunction on major issues.

‘’Our  State is backsliding and regressing at a rate that we haven’t seen before,‘’ feminist activist  Najeeba Hayat recently told The Associated  Press from the grassy sit-in area outside  Kuwait’s parliament.

Women were pouring into the park along the palm-studded strand chanting into the chilly night air for freedom, they say, authorities have steadily stifled.