ARMED ROBBERY:Two Brothers Burst into Tears in Court on Conviction of the Crime to Life Imprisonment 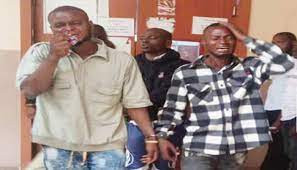 ARMED ROBBERY : Two Brothers Burst into  Tears   in Court on Conviction of  the crime to Life Imprisonment

Justice Oluwatoyin Taiwo   of the Ikeja Special  Offences Court   has sentenced  a domestic  worker, Genesis Ezebong  and his brother Michael  and one Ikade Moses , to life imprisonment  for armed robbery  at the Palmgroove  area of Lagos State.

The prosecution  counsel , Omowumi Bajulaye, during the arraignment  of the convicts , had told the court that they committed the  offence  of conspiracy  and armed robbery  on  January 13, 2019, at No 222 Ikorodu Road, Palm Groove, Lagos.

According to Bajulaye, the trio , while  armed with cutlass, shovel and other dangerous  weapons, robbed one Daniel  of 1 compact  Laptop, 1 Apple Laptop, Gold, and Costumes, Jewellery, Blackberry Phones,, one Digital Camera, Soccer Shoes and two  other phones belonging  to one Titilope Akeredolu.

The prosecutor  , during trial , called three witnesses and tendered  documents such  as defendants’ statements which were admitted  as exhibits.

The witnesses who had testified  before the court  included Inspector  Okunade Olumiyiwa, Titilope Akeredolu and Investigative  Police Officer and Inspector  Olawale Oni.

The witnesses had narrated to the court  how Akeredolu ‘s domestic staff  conspired  with others , who were armed  with dangerous  weapons , broke into  his boss’s  house with  his gang after he had left  for church ,locked the security man  as well as other occupants  in the toilet.

Akeredolu  said , after she went  to church  on Sunday morning, she received a call from her security man  who told her  that the first convict, Genesis Ezebong, her  domestic staff, broke into  her apartment  with a cutlass and stole her belongings.

She told the court that the gateman  narrated   the robbery incident to her, how  they were locked  in the toilet , and how the convicts broke  into her room  around 10.30am

The presiding Judge held  that the prosecution has proved  the case beyond a reasonable  doubt , the circumstantial evidence  against  the defendants  while sentencing them.