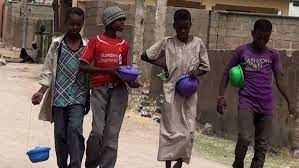 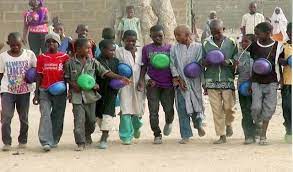 Almajiri on daily round for daily bread

‘The Chief Executive  of the rice mill, Isah Muhammad Garawa delivered  an address  in English  to describe his growing up to the CBN governor in a fairly spoken language that entertained those present at the event’ 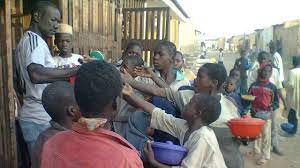 According to a report by ‘Vanguard’, it was all fun through at the official commissioning of the Gerawa ultramodern 420 MT/Day rice mill by the Central Bank of Nigeria (CBN) Governor, Godwin Emefiele in Kano.

The CEO of the rice mill, Isah Muhammad Gerawa delivered an address in the English Language to show his development to the CBN Governor in a fairly spoken language that entertained those present at the event.

He described how he metamorphosed from an Almajiri boy in the past to a billionaire.

‘’I lost my pan the fourth year, the one I use to beg for food with. I didn’t inform my dad.’’

‘’I went to one of the filling stations at Zaria road where I met a truck driver. I begged him to please take me to Lagos, that was in 1980’’.

‘’The driver agreed to take me to Lagos. He bought food for me because I had no single kobo by then.’’.

‘’The driver took me to Lagos. On dropping me I enquired about where the Hausa community is and I was told to go to Alaba’’.

‘’I went to Alaba but I knew nobody then at Lagos. I met somebody who agreed to make me his errands boy at the place he was selling tea and bread with egg. I worked there as errands boy, washing cups and plates and also fetching water.’’.

‘’I realized that I left Kano to Lagos to make money. But  become errands boy  of the tea seller  will not  bring that money to me so I decided to change my line of business.’’

‘’I started hawking with N20 from Alaba to Mile 2 every day including Saturday and Sunday’’ he said.

‘’When I came back from the North, here in Kano, I decided to try my hands on small scale industry where I started a groundnut oil-producing industry.’’

‘’At that time, I left my house and family and used to sleep with the security guard at the sight for fear  of the machines and other implements being stolen.’’

‘’I started with two engines used for grinding of groundnut for the production of oil. I was one of those loading and offloading the machine. It is with the blessing of Almighty God that we reached this level’’.

‘’I was able to establish other companies thereafter and later moved to the rice milling and farming as suggested by our president  Muhammadu Buhari’’, he added