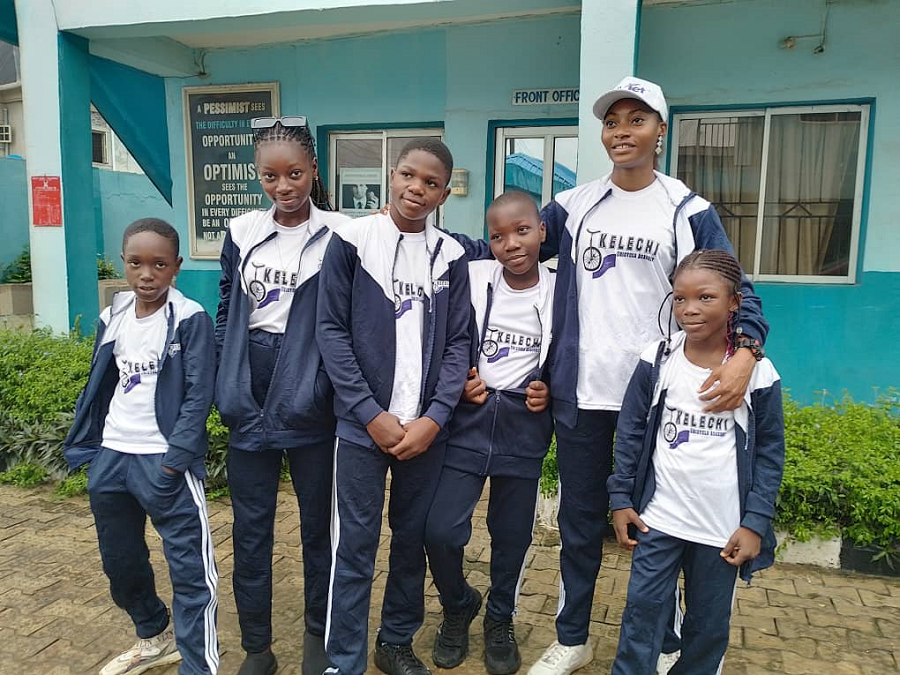 A Unicycle Academy –Kelechi  Unicycle  Academy –has recently  sprung up  in Lagos, Ipaja area    where  kids are taught  the art/sport as well as  additional  tricks and stunts  that can be done  with  the Unicycle.

The Academy was founded  and  overseen by  Favour Kelechi Okoh who doubles as the head coach at the academy.

Kelechi  uses  her family house  at Oyinade Sobowale close  in Baruwa –Ipaja as  the training  ground  where  she trains    kids and teenagers  on the art/sport.

She teaches  the kids a proper brigade performance and presentation on the Unicycle which  is something  that  has never  been done  from research  so far.

Riding a  Unicycle  on its own  is a herculean  task not to talk of the rigorous  coordination  of playing  drums  on it, that’s  some grit  and talent  which is worthy  of commendation.

‘’I love to be creative; I love to be unique; I love to  stand out in anything  I do. I can play   the drum set on the ground, but I  felt if  I could  infuse my  unicycling   skills  and my drumming  skills into one  art , it would  be a mind blowing  performance.’’

Kelechi says, ‘’I bought  some brigade  drums and began to  master  the new  art of drumming  on the Unicycle. It was sloppy  and seemed impossible  at first, but  I persevered till I mastered it.  Immediately , I  began  to teach my students and they mastered  it in no time. This metamorphosed   into our  bespoke Unicycle brigade (first of its kind)’’.

The Kelechi  Unicycle Academy  hopes to raise  world champions  and record  setters  in the nearest future as the head  coach  has already  taken the lead  in setting  a record  as the first  and only  Unicyclist to ride a Unicycle  to the hilltop  of Idere  hills tourist centre  in Oyo State.

Apart from  the teaching of   sports , the Academy also to teaches the  kids good morals, give them  positive exposures , improve their  interpersonal skills and many other life’s skills; because , the coach  sees  sport  as an agent  of socialization, positive change  and a weapon  of peace  and productivity   as against  social vices and channeling  youthful  energy  into wrong places.