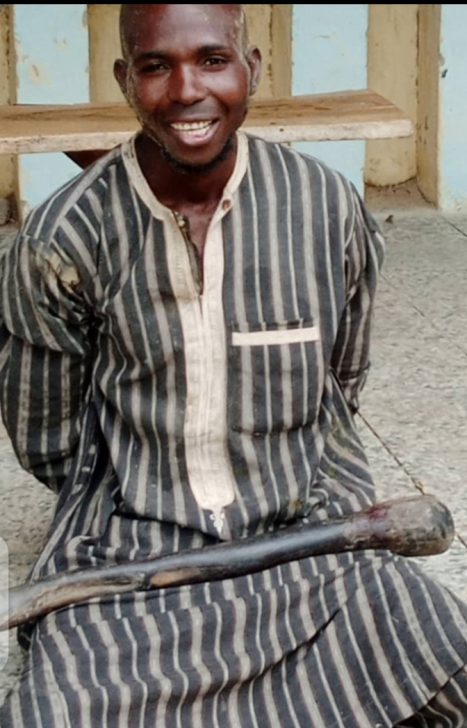 Mukaila  Ahmadu, a 37-year –old man has been alleged  to have killed  his father and mother and injured  other two people  with a pestle  in Zarada  Sabuwa  village  in the Gagarawa Local Government Area of  Jigawa  State , north-west Nigeria.

Mukaila Ahmadu, who allegedly killed  his parents in  Gagarawa  Local Government  Area  of Jigawa State ,  said, he did  so because  they uttered blasphemous   comments against  the Prophet Muhammad.

Mukaila, a singer, had killed both parents and injured  two other people  with a pestle  in Zarada Sabuwa village  in the Gagarawa Local Government  Area of Jigawa State North-West  Nigeria.

According to Premium Times, the  member  of the Tijaniyya  Islamic Sect  said his parents  mocked  and called  him a mad person  and opposed  him being  a praise singer  for the prophet. He has been arrested  by the Nigerian police. Ahmadu said,’’ I killed  them because  they refused  to accept the truth concerning  the prophet, Muhammad(SAW). I killed them because  they abused  the prophet  and their punishment  is death, there is no repentance   for any person  who abused  the prophet,’’ he was quoted as saying.

‘’I am a praise singer for the prophet, this year, I intend  to do a video  for  my song  and God willing, I will  do that , I will  be free because God  is with  the righteous person; that is why I am not worrying  over my action. ‘’My parents did not like the prophet Muhammad because I adore him;

they called me a mad person, I pleaded  with my father to support my work(praise singing), and I told  him   that  I am not a womanist , I am  not a gambler, I don’t  do drugs, and I don’t steal , but he refused to.’’

‘’My mother used to  go to neighbouring  village to blackmail me, telling people  to reject me whenever I came  to sing praises  to the prophet because  I am mad and refused  to work  on the farm.’’

‘’I am now in the police custody because , by human  thinking, I did a  wrong thing  but in the sight of God  and the  prophet, what I did  is the right thing.’’