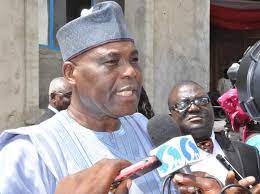 A Chieftain of the People’s Democratic Party(PDP) Chief Raymond Dokpesi,  wants the north to clinch the presidential slot in the 2023 presidential election.

According to Dokpesi, the Southern region had ruled for 14 years while the north had only 2years up till now.

In an exclusive interview with the PDP chieftain, chief Dokpesi gave his reasons for recommending fairness with regards to the opposition’s presidential ticket.

The former chairman of DAAR  Communications, Dokpesi has lent his weight to support the PDP presidential ticket to be zoned to the northern region.  The member of the BoT, Dokpesi is canvassing for a northern presidential candidate, not minding the earlier calls by the Southerners to produce the next president.

In an interview with The Guardian, chief Dokpesi said,  that there is a constitution of the PDP that states very clearly that there shall be rotation and zoning of both party offices and political offices.

The People’s Democratic Party’s chieftain, who also is a Southerner, says, he’s agitating for ‘fairness and justice.

According to him, the opposition party’s presidential ticket went through its rotation, saying 14 years after the 16 PDP was in power, the South had ruled.

He said,’’ so, by 2015, the PDP  had been 16 years in power, 14 years of the South and two years of the north, and that is the situation till today. You say you believe in justice, fairness, and equity, the North has done 2 years and the South has done 14 years. Is that balanced

Dokpesi, therefore, called on members of the opposition party to remain as one by choosing a candidate from the north.

Recall , that there is the aggressive concern  within the opposition  party on the decision  of the leadership of the party to zone the national chairmanship position to the northern region