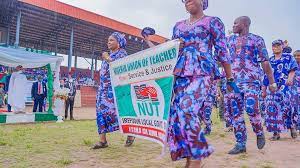 As  Teachers across the globe commemorate the Year 2021 World Teachers’ Day, the teachers in Osun have passed a vote of confidence in the Administration of Governor  Adegboyega Oyetola for taking their welfare and well-being as the topmost priority.

The teachers gave the commendation on Tuesday, during the celebration of the year 2021 World Teachers’ Day organized by the State Wing of  Nigeria Union of Teachers (NUT) at Osogbo City Stadium.

The obviously enthusiastic teachers hailed the government’s passion for educational transformation as reflected in its avowed commitment to the provision of quality, qualitative and functional education across all levels. The immediate past State Chairman, Nigeria Labour Congress (NLC), Comrade Adesiyan Saka Olalere, cleared the air that reversal of the single uniform by Governor  Adegboyega Oyetola was not in any way aimed at neither to rubbishing anyone nor the education reforms executed by the immediate past administration of former  Governor  Rauf Aregbesola. 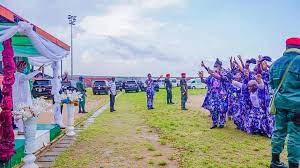 Olalere noted that the reversal was a quick response to the yearnings and agitations of the masses,  particularly parents and old students of the affected schools who had openly clamoured for immediate reversal of the names of their schools to the original nomenclature and the single uniform regime.Speaking on behalf of the teachers in theState, the State Chairman, Nigeria Union of Teachers, Comrade  Kabir Adekunle  Adekomi, lauded Governor Oyetola for making it up to workers, particularly teachers, by inspiring a senseof belonging, hope, and dignity among them.   He appreciated the government’s efforts at giving teachers adequate training, empowerment, and motivation, and providing them with necessary infrastructures, instructional materials, remunerations, career progression, and incentives to meet the challenges and demands of the recovery agenda.

He said,’’ We are solidly behind your administration for the good works you have been doing, most especially your continued and prompt payment of full monthly salaries; implementation of thirty thousand nairas (N30,000) minimum wage; monetization of promotion letters previously earned; subsequent movement of workers out of the stagnation of many years and re-introduction of annual salary increment for teachers.

‘Other welfare efforts of government include re-engineering of the existing education policy; formulation of new strategic policy initiatives such as restoration of nomenclatures and reversal from 4-5—3  to 6-3-3-4 system in tandem with the National Policy on Education ‘ return of schools to their previous status so as to reflect the age-old tradition of schools in the State; abolishment of single Uniform Policy; and establishment of Osun State Schools Management Commission.

‘’Other initiatives still included renovation and revitalization of office of ZIES/LIE’S for effective monitoring; purchase of six(6) operational Hilux Vehicles for ZIES/LIE’S’purchase of furniture for learners and teachers’ renovation of schools across the State; distribution of instructional Materials to Public Schools across the State; and distribution of  CVID-19 preventive materials to students and teachers in public schools among numerous others’’.

In his remarks, the immediate past State Chairman of NLC, Comrade Adesiyan Saka Olalere, said the return of schools to their previous status, restoration of schools nomenclatures as well as a scrap of single uniform policy by the Oyetola-led government was in order and not a motive to disparage the good policies of his predecessor.

He said” to us, the reversal of the names of the public schools across the State among other education reforms by Oyetola-led Administration was not to rubbish anyone or disparage the works of the immediate past Administration but rather, a swift response to people’s yearnings.

‘’So, as far as the school nomenclature is concerned, it is not true that the present Administration is trying to change the narrative. When there is an agitation in the society for the change  of a particular policy of the government, it is the responsibility of the government  to heed to the people’s demands, hence the swift response.’’

‘’What we have seen is that government has shown that it has listening ears, as against the insinuations that the initiative was aimed at rubbishing the immediate past regime. Look at the schools built by the former Governor Rauf Aregbesola; the schools are still there and are being maintained by the present Administration. That is a sign of continuity.’’.

‘’We all knew the side effects of single uniform. Some schools were almost closed down  as a result  of the unruly behaviour of some students who were  as at then difficult to identify due to the single school uniform.’’

‘’It is unfortunate that this issue has been politicized. We all knew that the issue of a single uniform created a lot of crises. The State Government was sued by some old students challenging the change of the names of their schools’’.

In his remarks, Governor Adegboyega Oyetola said teachers remain the heroes and heroines of the New Normal occasioned by the adverse effects of the global Coronavirus pandemic that has been ravaging the world.

He said, his Administration would continue to hold the teachers in high esteem and prioritize their welfare and well-being as professionals that kept hope alive for a better tomorrow for all professions.

The Governor urged them to keep on enforcing Covid-19 protocols for effective teaching and learning. He urged the teachers to continue to be the first-line channels for sensitizing people and implementing the message of observance of Covid-19 protocols for safety in the face of waves of deadly pandemic ravaging the natiOyetola, who described teachers as indispensable companions to the socio-economic and infrastructure development of any society, said, the Administration would do everything possible to refine the education sector through the provision of quality, qualitative and functional education across all levels.