10 Key Races That will Determine Fate of US Senate 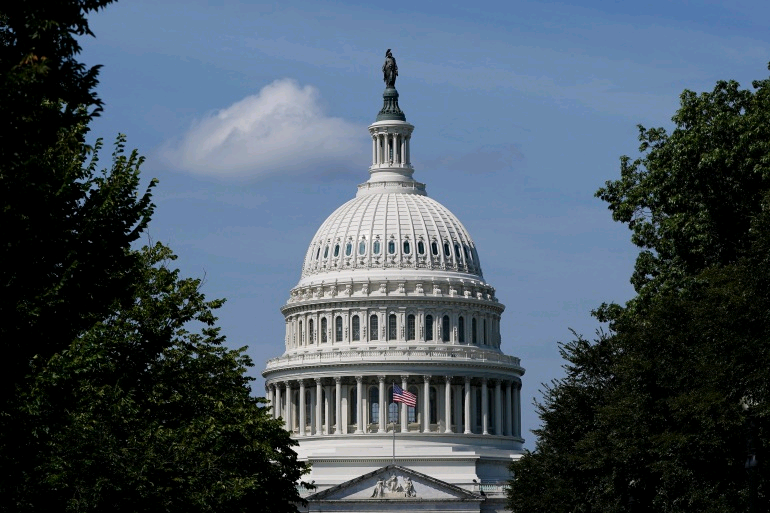 With 35 Senate seats up for grabs, Republicans are pushing to regain control of the chamber to frustrate Biden’s agenda.

Besides passing legislation, the US Senate is responsible for confirming federal judges and ratifying international treaties
Washington, DC – Americans will head to the polls on November 8 to vote in elections with enormous consequences for the country’s future. Control for both chambers of the United States Congress will be in play.

There are 35 Senate races this year, but the winner is all but a foregone conclusion in most of the contests. Republicans are expected to retain their seats in conservative states like Alabama and Idaho, while Democratic candidates will most likely win in liberal states, including California and New York.

What are the US midterm elections?
Biden pardons thousands convicted of marijuana possession
list 3 of 3
Republicans bank on tough immigration line as US midterms near
end of list
That leaves a handful of races in play; those are largely based in swing states that do not have clear ideological leanings.

Democrats hold the slimmest of majorities in the 100-member Senate which is divided 50-50, with Vice President Kamala Harris serving as the tiebreaker. So to gain control of the chamber, the Republican Party, also known as the GOP, needs to add only one seat.

The GOP will try to flip seats in swing states up for grabs – Nevada, Arizona, Colorado, Georgia and New Hampshire – while protecting its vulnerable candidates in Wisconsin, Ohio, Pennsylvania, North Carolina and Florida.

The reverse goes for the Democratic Party, which will hope to grow its majority so that it is not reliant on the two most conservative members of its caucus – West Virginia’s Joe Manchin and Arizona’s Kyrsten Sinema – who often defy President Joe Biden’s agenda.

In addition to legislating – a task it shares with the House of Representatives – the Senate is responsible for confirming federal judges, cabinet officials and ambassadors, as well as ratifying treaties.

Each of the country’s 50 states has two senators who are elected to six-year terms.

Here is a look at the 10 Senate races that will decide which party will control the chamber:

The Senate race in Pennsylvania pitting Mehmet Oz, a physician and TV personality, against John Fetterman, the state’s lieutenant governor, is one of the most closely watched contests this year. They are vying to replace retiring Republican Pat Toomey.

Neither candidate is a traditional politician. With no previous political experience, Oz is following the television-to-politics path taken by former President Donald Trump, who had endorsed him in the Republican primaries. Fetterman, a former mayor of Braddock, has gained national fame with his casual attire and blue-collar appeal. The Democratic Senate hopeful has faced questions about his health after suffering a stroke earlier this year.

The two campaigns have engaged in online skirmishes almost daily – with Fetterman regularly questioning Oz’s ties to Pennsylvania – stressing that he belongs in neighbouring New Jersey where he lived for decades before moving in 2020. Oz says he calls Pennsylvania, where he graduated from college, home. The Republican candidate would become the first Muslim American in the US Senate if elected.

On policy, Fetterman has emphasised manufacturing more products in the US and ending price-gouging, while Oz has focused on increasing US energy production and securing the border against “illegal immigration”.

Pennsylvania is a swing state where elections are often close. Biden carried the state against Trump by less than 1.2 percentage points in 2020.

The contest in Georgia between Raphael Warnock, a preacher and sitting senator, and Herschel Walker, an American football legend, has been a headline generator for the national media in the US.

Scandals and gaffes have raised question marks about the electability of Walker – a staunch Trump supporter who has highlighted his Christian faith in the campaign. Still, the former University of Georgia running back continues to enjoy the support of the leadership of the Republican Party, and opinion polls show the race remains close.

Among other scandals, Walker has been accused of paying for a girlfriend’s abortion in 2009 despite his support for a national ban on the procedure. He has vehemently denied the allegation – first reported by the Daily Beast – as a political attack.

For his part, Warnock – who was elected in 2020 in a special election to fill the rest of the term of a retired senator – has focused on his legislative work, including bipartisan efforts to secure federal funding for Georgia. He has also highlighted his support for reproductive rights in contrast with his opponent’s stance on abortion.

Biden won Georgia against Trump by a razor-thin margin in 2020.

In the Midwestern state of Wisconsin, Democrats are looking to defeat Senator Ron Johnson, accusing him of involvement in Trump’s effort to overturn the 2020 elections.

Johnson is facing off against the state’s Lieutenant Governor Mandela Barnes, who is campaigning on protecting abortion rights repeatedly citing his opponent’s support for abortion bans.

The Republican incumbent has painted Barnes as “dangerously liberal”, citing old tweets of the lieutenant governor calling progressive Congresswoman Alexandria Ocasio-Cortez “my president”. Johnson, who was first elected to the Senate in 2010, has also touted his support for law enforcement, accusing Barnes of being soft on crime and pushing to de-fund the police.

In the 2020 presidential election, Biden won Wisconsin by less than one percentage point.

Ohio, previously a battleground state with no clear ideological leaning, has been trending Republican for several years. But with Republican Senator Robert Portman retiring at the end of the year, Democrats are seeing an opportunity to claw their way back into electoral contention in the Midwestern state.

Democratic Congressman Tim Ryan – who previously ran for president – is taking on JD Vance, a venture capitalist and author, to flip the Senate seat in Ohio.

Ryan has presented himself as pro-worker, citing his opposition to “unfair trade deals introduced by Democrats and Republicans”. Recently, he was one of few Democrats to come out against Biden’s student loan forgiveness plan.

Vance describes himself as a “conservative outsider” and has leaned on his own Ohio upbringing and humble beginnings – narrated in his bestselling memoir, Hillbilly Elegy – while criticising Democrats on immigration and spending policies. The Republican candidate has been denounced for promoting the racist “Great Replacement Theory” when he accused Democrats earlier this year of pushing to “bring in a large number of new voters to replace the voters that are already here”.

Trump won Ohio in 2020 by more than eight percentage points.

In Nevada, the state’s former Attorney General Adam Laxalt is trying to unseat Democratic Senator Catherine Cortez Masto and polls show them in a close race.

Laxalt has focused on inflation, which he blamed on what he calls Biden’s “spending spree”, while Cortez Masto – who became the first Latina to be elected to the US Senate in 2016 – has promised to protect abortion rights.

Nevada, which Biden won in 2020 by 2.4 percentage points, relies on tourism and its service industry and was hit hard by COVID-19. So, as Cortez Masto touted securing funding for the state during the pandemic, her opponent has slammed shutdowns and promised to investigate the “public health failures of the last several years”.

Congresswoman Val Demings, a former police chief of Orlando who served as a House manager during Trump’s first impeachment, is taking on Republican Senator Marco Rubio in Florida.

Republican candidates have consistently eked out narrow wins in the state in recent years. Florida is home to the top likely Republican presidential candidates in 2024 – Trump and Governor Ron DeSantis who is up for re-election in November as well.

After Hurricane Ian battered the state, Demings highlighted the need to combat climate change and slammed Rubio for saying he would oppose relief aid if US lawmakers “load it up” with funding unrelated to the storm.

Rubio has pushed to portray Demings as “dangerously radical”, pointing out that her voting record in Congress is in lockstep with the leadership of the Democratic Party.

Trump beat Biden by 3.4 percentage points in Florida in 2020.

With venture capitalist Blake Masters pushing to unseat Democratic Senator Mark Kelly, Republicans are looking to stage a political comeback in Arizona, which went from a conservative stronghold to a battleground state in the last few election cycles.

A US Navy veteran and former astronaut, Kelly – who was elected in 2020 to finish the rest of the late Senator John McCain’s term – has made protecting abortion rights a central talking point of his campaign in the run-up to the vote.

Masters has been sounding the alarm about “illegal immigration” in the border state, blaming Kelly and Biden for the record number of unauthorised arrivals by migrants this year.

Kelly is the husband of former Congresswoman Gabby Giffords who survived a mass shooting in 2011 and became a gun control advocate.

Joe O’Dea, a businessman, has remained behind Bennet in most public opinion polls, but he was within striking distance. Republicans are looking to score a major upset that would boost their chances of winning the Senate.

In the campaign, Bennet – who has been in the Senate since 2009 – highlighted his independence and presented himself as a result-oriented lawmaker, underscoring his legislative efforts to combat poverty among other issues.

O’Dea has made inflation and public safety the focal points of his campaign, blaming Democratic policies for the rising cost of living.

Most polls have shown Hassan leading but by margins that could mean a potentially tight race.

While Bolduc’s message has centred on the economy and immigration, Hassan, a first-term senator, has made protecting reproductive rights the bedrock of her campaign.

Hassan has also accused her opponent of being “extreme”, citing his previous questioning of the legitimacy of the 2020 elections. Bolduc is one of the hundreds of Trump-endorsed Republican candidates who have raised doubt or denied that Biden was fairly elected.

In North Carolina, the retirement of Republican Senator Richard Burr is giving Democrats a chance to flip the seat in the state that was narrowly won by Trump in 2020.

Cheri Beasley, a former top judge in the state, is taking on Republican Congressman Ted Budd to replace Burr. And if public opinion polls are to be believed, it will be a tight race.

While regularly citing the economy and inflation, Budd has been pushing to portray Beasley as soft on crime, citing her rulings as a jurist and work as a public defender.

Beasley has called Budd’s House vote against certifying the 2020 presidential elections “dangerous” and slammed her opponent’s opposition to abortion rights.