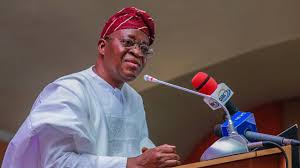 Osun State Governor, Mr. Oyetola, on Monday, said the reason behind Osun State to have celebrated the Nation’s Independence with an Essay competition for youths in secondary schools and tertiary institutions was to demonstrate his Administration’s commitment to building the teeming population for future leadership.

According to the Chief Press Secretary to the governor, Mr. Ismail Omipodan, Oyetola described the essay competition as a wake-up call to youths in the State to embrace intellectually engaging activities and to have a taste of good life rather than indulging in criminal activities.

‘’This is as Oyetola announced the award of scholarship to Miss Adegboyega Abisola Faith up to the university level in public institution of her choice within the Federal Republic of Nigeria’’.

The emergence of Faith as the winner of secondary schools category is a signpost of my Administration’s commitment to the provision of adequate, quality, equitable, functional and affordable education for Osun youths’’.

While receiving the winners of the 2021 edition of the essay competition of at the State Secretariat, Abere, urged teachers to continue to discharge their responsibilities to students with utmost fear of God and total commitment to the teaching profession.

‘’ONn the part of the government, the welfare of teachers and categories of workers will continue to remain priority’’.

Governor Oyetola also commended the sponsors of the events for their show of interest in developing youths and called on other stakeholders to join hands with the government in its resolve to propel Osun to greater heights by investing in the future of the youths.

In his remarks, the Commissioner for Regional Integration and Special Duties, Lekan Badmus expressed satisfaction with the successes recorded so far since the introduction of the future-focused and leadership-oriented essay competition.

According to Badmus, the programme has no doubt become a veritable tool for building future leaders through academic development and entrepreneurship advancement.

On behalf of the sponsors, the Managing Director of Omoluabi Holdings, Dr. Tunde Faleye, lauded the Administration of Governor Oyetola for the pace-setting effort of Osun, adding that his organization had resolved to continue to support not just the essay competition, but other good initiations of the government.

According to Faleye,’’ supporting the Administration of Oyetola shouldn’t be a difficult decision for any reasonable Stakeholder in Osun. He has shown commitment to the development of the State across different sectors’’.

In his remarks, the Chief Executive Officer of Rave FM Odsogbo, Mr. Femi Adefila, eulogized Governor Oyetola for the initiative which he described as a product of an integrity-oriented process.

He particularly lauded Oyetola ‘s social engineering which has rid the  State of tension and controversies, adding that he has consistently delivered good governance in the State in ways that impact the common man.

‘’Pensioners no longer march to our station to lament non-payment of entitlements. Osun is no longer in the news for the wrong reasons. There are no longer controversies in the public space to feast on. These are derivatives of Governor Oyetola’s calm disposition and exceptional approach to governance’’, Adefila said

Speaking on behalf of the examiners, Dr, (Mrs) Akintunde said, ‘’we are happy that this initiative is thriving at a period negative things have been happening among the youths. Osun has become a good example of good things.   I must commend your support on this. It shows your deep love for educational development’’.

Also speaking on behalf of the parents of the winners, Dr. Femi Adeyemo, applauded the Governor for putting in place an initiative capable of revamping the lost glory of the education system in the State in particular and Nigeria as a whole.

He said,’’ With this initiative, Governor Oyetola has shown us that he is focused, determined, resolute, and committed to turning around the State foe better and particularly revive the education sector.

Sincerely, we are enjoying you. You have given us the hope that truly, youths are leaders of tomorrow. As far as this initiative is concerned, it is clear that Osun is the pacesetter in education development. I congratulate the organizers, winners, the parents for believing in this initiative.

The winner of the secondary school category,Adegboyega  Abisola  Faith appreciated the governor and government of Osun for the investment of strategic efforts at revamping public education in the State.

Adeyemo Victor Ayodeji, the winner of the tertiary institution category, in his remarks, lauded the Oyetola Administration for the premium it has placed on quality education and that hope has been revived in him as a result of the quality leadership Osun is enjoying under governor Oyetola.