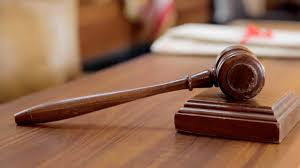 The victim was raped by the defendant when coming back from the church.

The News Agency of Nigeria reported that the defense counsel, Mr. Ramon Bashir, pleaded with the court to temper justice with mercy, noting that the defendant had no prior criminal record.

While delivering judgment, Justice Hakeem Oshodi held that the prosecution proved the case beyond a reasonable doubt.

‘’The evidence of the victim is concise and clear, while the defendant’s evidence is distorted before the court.

‘’He tried  to distort the facts in the timing of the incident, how  he got to the police station, and the name  he was called  on the day of the incident.’’

‘’There is clear evidence  before the court  that the defendant  forced himself  on the victim.’’

‘’There is also proof before the court that the defendant bit the survivor on the shoulder.

‘’The defender is hereby convicted of the two counts of rape and serious assault.

‘’The court has clearly considered the allocutus presented by the defense counsel, the Judge held.

Justice Oshodi noted that the court had no power to pronounce a lesser sentence for convicts of rape.

He said,’’ The defendant is hereby sentenced to life imprisonment, which is the statutory sentence for rape, and three years jail term for serious assault.

In a related development, a Chief Magistrate‘s Court sitting in Ado-Ekiti, Ekiti State, on Wednesday remanded a 20-year-old  gateman, David Emmanuel, in the custody of the Nigeria Correctional Service, Ado –Ekiti, for allegedly raping a primary five pupil.

Emmanuel allegedly committed the offense in the  Onigari area of  Ado-Ekiti on April 4, 2022.

In her statement to the police, the victim said, ‘’My mother sent me on an errand to buy foodstuffs for her. On my way back, I saw the man(defendant) who was working as a gateman.

‘’When I greeted him, he held my hand. I thought he was playing with me; he dragged me inside, tied my hands and mouth, undressed me, and had sexual intercourse with me.

I cried, but nobody heard me because my mouth was tied’’.

According to her, at that time, her parents had been searching for her.

‘’He later carried me and dropped me over the fence inside our compound where I was later found.

The case was reported at a police station and he was arrested,’’ she added.

The Chief Magistrate, Olu Bamidele, ordered the defendant to be remanded in prison for a period of  30 days pending the completion of the police investigation.