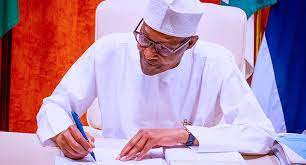 It was a mixed reaction as the stakeholders in the Niger Delta, including the Pan –Niger Delta Forum, PANDEF, Ijaw National Council, INC, described it as injurious to the development of the Niger Delta.

The senate and the Speaker, House of Representatives, Femi  Gbajabiamila, both affirmed that the new PIB was the best thing to happen to the oil and gas industry in Nigeria.

The Senate says, that the new PIB will bail Nigeria out of its present economic woes, while  Gbajabiamila of the House of Representatives is of the opinion that PIB will allow investments and transparency which would enhance the industry.

The Special Adviser to the President on Media and Publicity,      Femi Adesina in a statement says’’ working from home in five days quarantine as required by the Presidential Steering Committee on COVID-19 after returning from London on August 13, 2021; the President assented to the bill on Monday, August 16, in his determination to fulfill his constitutional duty.

According to Femi Adesina,’’ The ceremonial part of the new legislation will be done on Wednesday, after the days of mandatory isolation would have been fulfilled’’, he said.

Recall that the Senate had passed the bill on July 15, 2021, while the House of Representatives did the same on July 16, thus ending a long wait since 2000.

However, in a  reaction to the development, yesterday, PANDEF called for calm, blaming the disastrous affairs on Niger Delta lawmakers and governors who did not take appropriate steps to lobby other sections of the country on their position.

In a statement by  PANDEF, its national Publicity Secretary Ken Robinson, said ‘’The Niger Delta people will speak shortly, after full consultations on this callous act, on the best legal and political response.

‘’It is quite unfortunate that President Buhari went ahead to assent to the PIB, despite the overwhelming outcry and condemnation that greeted its passage by the National Assembly, especially with regards to the paltry three percent provision for the brazen appropriation of an outrageous thirty percent of NNPC Ltd. Profit for a dubious, nebulous  Frontier Oil Exploration Fund.

‘’ This assent by President Buhari simply speaks to the repugnant attitude of disregard, propelled by arrogance, disdain, and contempt with which issues concerning the Niger Delta is treated, particularly by the present administration.

‘’What this Act signifies is an unequivocal message to the Niger Delta People that how they feel and what they say do not count at all, in the schemes of Nigerian project’’.