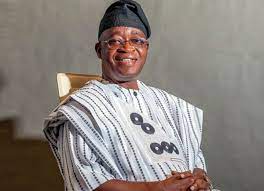 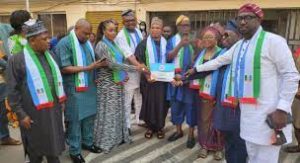 The APC Chairman-elect in Osun, Prince Gboyega Famoodun, has presented the nomination form bought for the governor by his political associates.

Speaking during the presentation of the form to Governor Adegboyega Oyetola in Osogbo, the chairman, Osun APC Elders Caucus, Sola Akinwumi, eulogized Oyetola for the regular payment of workers’ salaries.

According to him, if salary payment had not been regular, APC members and leaders would not be free to move in their respective communities.

He said we have suffered a lot in  Osun State. All of us who are in the progressives’ fold will understand what I am saying. And if somebody comes, first we must give credit to him for the regular and timely payment of workers salary.

‘’That is why the party chairman can move freely on the streets.  If the salary had not been paid regularly, all of us would not be free in our various communities. We thank you for that. We know it takes a lot of sacrifices to do that.

‘’I am thanking the party chairman too, Prince Adegboyega  Famoodun. They made life difficult for him as they did to Mr . Governor. They want to get at him to get at Mr. Governor. Their various plans were scuttled by the mere intimidating size of the chairman’

While presenting the form, Mr. Famoodun urged Governor Oyetola to see the good intention behind the purchase of the forms as a rare honour for him to continue his good works.

In his response, Governor Oyetola commended those who purchased the forms, saying the gesture was an indication of the unity within the party.

He said, ‘’’’ When you are talking of the party, I  don’t see any other than we that are here. So, to have gone this far is an inspiration for me to do more. It is an inspiration   for me  to be of service  to our people  for the next four years, I accept without reservation.’’