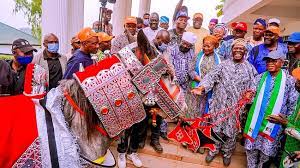 Chief Bisi Akande, the former Governor of Osun State and the first Interim National Chairman of the All Progressives Congress (APC)presented a horse gift to Governor Adegboyega Oyetola,  tells him to ride it to power come July 2022.

Governor Oyetola after his tour of the Federal  Constituencies visited Akande at his Ila Orangun residence. 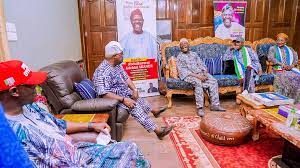 The tour was a statewide consultation to the 9  Federal Constituencies in Osun which the Governor was using to interact with the newly elected  APC executives at the wards and local government levels and to inform them and party members of his intention to participate in the party’s forthcoming primaries as a prelude to the July governorship election.

The presentation of the horse to the Governor by Chief Akande is symbolic and viewed as a declaration of high support for the Governor of Osun State, Adegboyega Oyetola.

Accepting the gift, Governor Oyetola who was flabbergasted  but also excited  with a beaming smile said ‘thank you very much.’’,