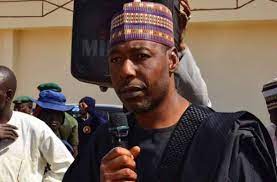 The Borno State Governor, Babangida Zulum had said that the whereabouts of a larger population of about 10% of the people in the State is unknown owing to the insurgency.

Zulum made this disclosure to the State House Correspondents after a meeting with President Muhammadu Buhari.

The Governor who said he discussed the report of the surrendered Boko Haram insurgents with the President, however, said, he did not see any reason why those who surrendered should be rejected.