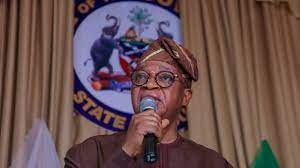 The Governor of Osun State, Adegboyega Oyetola, on Sunday expressed his Administration’s preparedness to set up a tripartite committee that would review the existing  Chieftaincy Law of the State.

The  Committee, according to the Governor,  would involve a representative each from the members of the State  Executive Council, Legislature, and Traditional Council, with a mandate to painstakingly review, analyze critically and meticulously, the palpable grey areas in the said law.

ThGovernor Adegboyega reaffirmed his Administration’s commitment to further strengthening the traditional institution to enhance its capacity for effective and efficient service delivery to the people of the State.

Receiving the proposed letter written by members of the State  Traditional  Council of Obas, aimed at effecting the review of the State Chiefs’ law, at the Government  House, Osogbo, Governor Oyetola expressed delight at the move made by the Monarchs to review the Chiefs Law, saying, the initiative would go a long way to permanently find a possible and lasting solution to some of the challenges attributed to kingship and  Chieftaincy in the State.

Governor Oyetola, who described the gesture as a welcome development, assured that the tripartite committee would be constituted in the next few days to swing into action.

He said the Committee, when constituted would come up with suggestions and proffer workable solutions to some of the identified challenges in the existing law, thus helping to ensure possible amendment that would suit the collective interest of the people of the State.

‘’I  commend our traditional rulers on this visit. I thank you for your unflinching support, most importantly your continued show of love before,  during, and after the last primary election of our party. Your prayers when we visited you at your various palaces before the primary can never be forgotten as this manifested in the success we recorded at the party’s primary election.

‘’As to the Chiefs Law of our dear State, we will be very happy if that is reviewed. I am very happy that you are looking into it already. This is a welcome development.

‘’We know most of these laws are obsolete and we welcome the idea of the tripartite Committee that you have come up with. It is our  hope  that this would further  strengthen  the traditional  institution which has been  our vision  as a government.’’

‘’There is  no doubt  in the fact  that the existing  Law  has its own  challenges and this  has been causing a lot of  crisis  as to enthronement  of monarchs among another chieftaincy –related  matters.’’

‘’So,   to further demonstrate our commitment to ensuring a vibrant and viable traditional institution, we will set up the committee to look into  it.  I commend  you for  your  efforts at keeping  your domains safe.’’

‘’We understand the little crisis in some towns, but we hope with this move and with the support from Federal Government, it will be a thing of the past. We appreciate your continued support to ensure security and adequate protection of lives and property of your subjects in your respective domains,’’ Oyetola added.

Presenting the letter on behalf of the Chairman of Osun Council of Obas, the Aragbiji of Iragbiji, Oba Abdul-Rasheed Ayotunde Olabomi, said, the call to review the State Chiefs Law was arrived at having painstakingly assessed and evaluated the grey areas of the existing Law.

Oba  Olabomi, who is the leader of the Committee on State Chiefs Law set up by the members of the Traditional  Council of Obas, said the review of the Law would help to innovatively reposition the traditional institution in the State.

The Aragbiji of Iragbiji said the Chairman of the Council and Ooni of Ife, Oba Adeyeye Enitan Ogunwusi, was pleased with the decision of the Committee to get the Law reviewed.

‘’Sequel  to the decision reached at the State Council of Obas meeting that the  Chiefs Law of the State should be reviewed and necessary amendments made, the committee  set up  by the Council  recommended as follow:

‘’That the review of the Law cannot be done in isolation; that the council would need the collaboration of both the Executive and Legislative arms of government.

‘’Consequently, the Council decided to seek  Your Excellency’s approval for the setting up of a Tripartite  Committee that would comprise the following representatives; Executive arm of Government, State House of Assembly, and Council of Obas’ Committee on the Review of the Chiefs’ Law.

‘’It is pertinent to commend and appreciate  Your Excellency for the respect and honour with which   Your Excellency has been handling the Traditiona;l Institution in the State. God Almighty shall continue to guide you right in all your endeavours.

‘’It is the believe of the Council members that your Excellency would also see the reason for the review of the Chiefs’ Law which is to make the institution more dignifying,’’ the letter reads in parts.