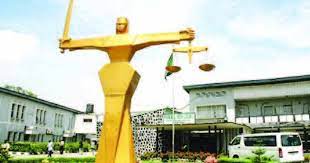 An Abeokuta  Magistrate Court has released a 17-year-old  boy  Waris Oldehinde, who was among the four boys arrested for killing their girlfriend in Ogun State.

The Guardian learnt that the Chief Magistrate Court I.O.  Abudu released Oladehinde, based on the legal advice received from the State Director of  Public Prosecution.

The State Police Command, who confirmed the release yesterday, said the suspect was released at the instance of the court.

Two of the accused boys have confessed that while the third accused boy allowed them to burn the head in his house, Oladehinde only walked in after the deed had been done to pay a visit.

It was gathered that the exoneration seemed complex because the beheading took place in the middle of the night and people do not visit their friends during the night.

Efforts by The Guardian to get to the Magistrate and the DPP to react couldn’t fly at the time of this report.

A witness, who spoke on condition of anonymity, explained that Oladehinde went to his friends ‘ place at about 11.00 pm.

Recall that the suspects,  identified as Balogun Mustaqueen,, Majekodunmi Soliudeen, 18, Abdulgafar Lukman, 19, and Waris Oladehinde,18 were arrested on January 28, 2022, while they were burning the head of their victim, Sofiat, Majekodunmi’s girlfriend.

The teenagers were then remanded in  Oba Correctional Centre in Obafemi-Owode Local Council of the State after being arraigned on two counts charge of conspiracy and murder. Further hearing on the matter continues.