Alaafin’s Death: Oyetola Mourns, says, His Transition is End of an Era 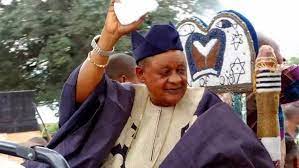 The Osun  State Governor, Adegboyega  Oyetola, has described the demise of the Alaafin of Oyo, His Royal  Majesty, Oba Lamidi Adeyemi111, as shocking, saying it signifies the end of an era.

Oyetola also commiserated with his Oyo State counterpart, Governor Seyi Makinde, and the entire  Yoruba race over the passing away of the late monarch.

The Governor condoled the late royal father’s family, the government, and the people of Oyo State over the unfortunate incident.

He described Alaafin’s transition as a personal  loss because, according to him, the late monarch  was ‘’a good friend of Osun who  was always  ready to identify  with  our government and celebrate our humble accomplishments and achievements.’’

In a statement by his Chief Press Secretary, Ismail Omipidan, the governor said the late monarch was a strong believer in progressive ideals, and that he remained true to his convictions over the years until he breathed his last.

Oyetola further described Iku Baba Yeye, as a humble and amiable monarch despite his revered position, saying that the Yoruba race has lost a quintessential intellectual whose knowledge of and commitment to the cause of the Yoruba race was unrivaled.

The Governor said: ‘’I received with sadness news of the transition of Alaafin of Oyo, Oba Lamidi Adeyemi111. This is a huge loss to the entire  Yoruba race and the country as a whole.

‘’On behalf of the government and the good people of Osun, I commiserate with Governor Seyi Makinde, the royal family, subjects, friends, and associates of the late traditional ruler.

‘’Oba Adeyemi was a visionary and exemplary leader whose 5-year reign brought tremendous attention, peace, stability, and unprecedented development to the ancient Oyo town and its people.

Baba was a strong believer in progressive ideals, and he remained true to his convictions over the years until he breathed his last.

‘’He will be long remembered for his impacts, achievements, outstanding legacies, and remarkable service as a custodian of the rich Yoruba cultural heritage and traditions.

‘’I pray Allah overlooks his shortcomings and admits him to Aljannah Firdaus.

May He also grant his immediate family, Governor Makinde, and the entire people of Oyo State the fortitude to bear the loss’’.