My Reelection is God’s Project… 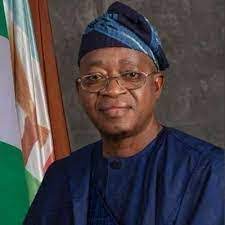 “My re-election is God’s project because the masses are behind me, and they will return me to office in the next election.”

Governor Adegboyega Oyetola of Osun says keeping to promises he made to the people of the state in the last three and half years of his administration, with limited resources, will give him victory in the July 16 governorship election in the state.

The governor said this at an engagement programme organized by the State’s Civic Engagement Centre with the Osun Chapter of the Association of Master Bakers on Sunday in Osogbo.

Mr. Oyetola, who was represented at the event by his Special Adviser on Civic Engagement, Olatunbosun Oyintiloye, said the masses could testify to his achievements in all areas, which would make them support his re-election.

The governor, who noted that he would continue to focus on quality service delivery to the people, said the will of God would prevail through the popular support of the people.

Mr. Oyetola said with the available meager resources accrued to the state, he had turned the economy of the state around positively for the benefit of those who elected him.

The governor, who described the masses as the pillar of his administration since its inception, said that he would continue to make sacrifices that would make life more comfortable for them.

Mr. Oyetola also said he remained the candidate to beat in the election, adding that Osun belonged to the progressives, and nothing could change the status quo.

“My re-election is God’s project because the masses are behind me, and they will return me to office in the next election.

“I kept the promises I made with the good people of the state within the limited resources, and I know that they will keep faith with me on the election day.

“I will not in any way relax in my second term in office, but rather continue to build on the solid foundation we have laid,” he said.

Mr. Oyetola appealed to members of the association, who were yet to pick their Permanent Voter Cards at the Independent National Electoral Commission office to do so and use the same to support his re-election.

He said he would continue to provide the enabling environment for the growth and expansion of their businesses.

In his remarks, the Chairman of the association, Bakare Ganiyu, commended the governor for various developmental projects in the state.

Mr. Ganiyu promised that members of the association would support the re-election bid of the governor for his administration to continue with the good works.