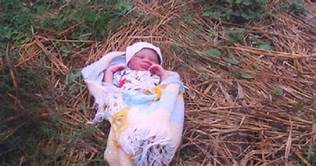 A fifty (50) years old woman, Salamotu Baba was sentenced to six-month imprisonment with an option of N200.00 fine, having been found guilty of abandoning her one –day old child in a bush after taken delivery of him by herself. She delivered the baby boy inside a bush along Ajase-Ipo road in Irepodun Local Government Area of Kwara State, Nigeria.

The convict appeared in court on a one count charge of cruelty to child as a contravention to section 238 of the penal code.

The charge sheet indicated that she took delivery of the baby herself and abandoned him in the bush with the excuse that she could not foot the bill for nursing him.

According to the convict, the true paternity of the child could not be ascertained because she is a divorcee who has taken recycling herself among men as a hobby to make ends meet after the collapse of her marriage. She previously had ten children before this time. Because of the gravity of this bad act, Police prosecutor, inspector Kareem Jimoh, applied for summary trial of the accused since the accused pleaded guilty to the charge against her.