US Embassy Denies Tinubu Visa As He Heads to Chatham House 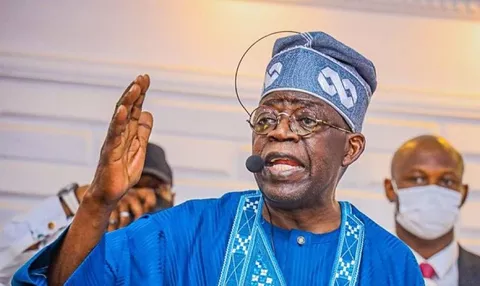 The United States Embassy has denied the Presidential candidate of All Progressives Congress (APC), Asiwaju Bola Ahmed Tinubu Visa to travel to the US for planned engagement, a Federal Lawmaker confided in Pointblanknews.com.

Pointblanknews.com learnt that the trip was meant to accommodate a political engagement but more importantly, to seek medical attention outside the prying eyes of Nigerians.

It was further gathered that after discovering that the Presidential candidate of the Peoples Democratic Party (PDP) Alh. Atiku Abubakar was invited for a series of engagements ahead of the 2023 presidential election, Asiwaju Bola Tinubu and his handlers decided to apply for US Visa to also organize an engagement for him.

Sources close to the APC Presidential candidate disclosed that  his Visa application was denied and therefore the event could not be put together.

On the sidelines of the event however, Asiwaju was billed to seek further medical attention from American doctors, had the move for the event been successful.

With the denial, Pointblanknews.com gathered that Asiwaju Bola Tinubu seized the Chatham House engagement which is penultimate Monday, while he will use the rest days for his medicals.

The source revealed that ” He (Tinubu) was supposed to visit Baltimore where he would have seen a doctor after the event if his Visa had been approved. This would give him the needed privacy especially now that people are increasingly worried about his mental and health situation.

“It would have been easy for him to go to France since it has been his destination of choice for medical attention but will be too obvious since he normally goes there for check up hitherto.

“This is the reason why the Chatham House option came in handy since it’s just one day and the rest days can be used for medicals”.

Pointblanknews.com reports that the Presidential candidate of All Progressives Congress (APC), Asiwaju Bola Ahmed Tinubu, will speak on his agenda for Nigeria at the Royal Institute of International Affairs, also known as Chatham House, on December 5.

Tinubu, according to Chatham House, will, during the occasion, have the opportunity to “discuss his vision and recently unveiled a manifesto for ‘renewing hope’ in Nigeria, including his policy proposals for economic reform and revival, and how to deliver secure and inclusive job opportunities for Nigerian citizens.”

Tinubu, who has been the subject of various speculations about his health, just like President Muhammadu Buhari was in 2015 when he was the APC presidential candidate, will, probably, be hoping that history is on his side.

Buhari also spoke on his manifesto at the same Chatham House, ahead of the election that brought him to power in his first tenure.