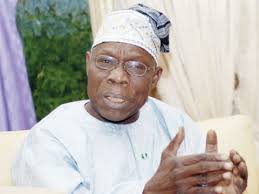 The former President, Olusegun Obasanjo, has called for state police as a result of the incessant security threats in Nigeria.

According to Obasanjo, ‘’it remains a better option than community policing’’.

The former president spoke when the leadership of the Association of Ex-Local Government Chairmen in Nigeria paid him a courtesy visit at his penthouse in Abeokuta, Ogun State capital.

‘’Our situation in Nigeria concerns everyone, particularly the case of terrorism’’, said the former president.

The pioneer National Chairman of the Association, Albert Asipa, the Ogun State Chapter, Shoyemi Coker, the BOT Chairperson, Chinwe Monu- Olarewaju, and the traditional ruler of Odogbolu, Toye Mojeed Alatise, were among those present.