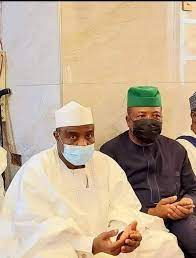 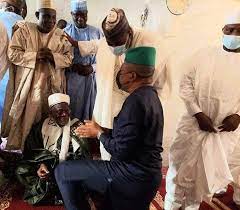 The immediate former Governor of Imo State, Hon. Emeka Ihedioha has informed that it was deliberate falsehood reports on social media alleging that he has switched his Christian Faith.

The former Governor said the claim that he switched  Christian faith for Islam is a gross misrepresentation of facts. 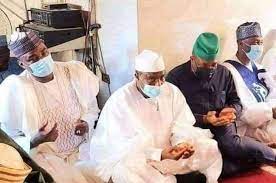 The former Deputy Speaker in the House of Representatives was spotted on Wednesday praying inside a mosque during the funeral rites of the elder brother of Sokoto State Governor, Aminu Tambuwal.

In a statement by his media aides, Chibuike Onyeukwu, on Friday, he maintained that the claim is a ‘’harebrained act of desperation that is as malicious and wicked as it is puerile’’.

The statement reads:’’While His Excellency has great respect for all faiths, everyone knows that he is not only a committed Christian but, also a Knight of the Anglican Church.’’.

‘’For emphasis, His Excellency was only paying his respect to the departed. The picture attached to the viral fake news was taken on Wednesday, January 19, 2022, at the Tambuwal family residence in Tambuwal Local Government Area of Sokoto State, where Rt. Hon. Ihedioha joined his longtime friend and Governor of Sokoto State, His Excellency, Rt. Hon. Aminu Waziri Tambuwal, CFR, for the funeral rites of his elder brother, Alhaji Muhammadu Bello(Wazirin Tambuwal), who passed on few days ago.

We know the desperados behind this mischief. Fortunately, the perceptive public knows them too.’’

Tribune online recalls that such had recently flooded the social and mainstream media with reports purporting that he had concluded plans to dump PDP, for the All Progressives  Grand Alliance (APGA). Alleging that he was nursing a Senatorial ambition.

The statement continues, ‘’unfortunately for these failed political jobbers, the highly discerning and ever vigilant public has stuck with Rt. Hon.  Ihedioha despite these orchestrated attacks.

‘’It is not in contention that his Excellency  Rt. Hon. Ihedioha remains the darling of the people of Imo State. This is because of his candour and outstanding stewardship in the high offices he has held, especially his accomplishments as the Servant-Leader of the PDP-led Rebuild Imo administration.

‘’However, we know that at the appropriate time, our brothers and sisters of all religious inclinations will join other well-meaning people of Imo State to give Rt. Hon. Ihedioha resounding support to reclaim his mandate on the platform of the PDP, a party  he has been , not just a foundation member but also a very loyal and strong pillar.

‘’Hon. Ihedioha has remained the pride of PDP, not only in Imo State but nationally. He is a party loyalist without blemish.

‘’The public should therefore disregard these smear campaigns and go about their normal businesses.

We, however, expect more of these blackmails in the coming days but we are not distracted.’’.

‘’All eyes must be on the ball. What is paramount  to the people of Imo States at this time is a return to the era of  good governance so that  the sacred project of rebuilding Imo State  will continue apace,’’ it said

EFCC INVATION ON SENATOR OKOROCHA’S RESIDENCE: Lays on the floor , begs for Help