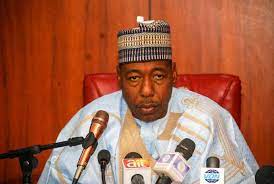 The Borno State Governor Babagana Zulum, as monitored on the Channels Television Programme-Sunrise Daily has pitched his tent with the decision of the Southern Governors which unanimously agreed that President Muhammed Buhari’s successor must emerge from the South in 2023.

As read in the Communique by the Ondo State Governor Arakunrin Olurotimi Akeredolu, shortly after the meeting, he said the Forum is committed to politics of fairness and equity.

Reacting to the resolution, the Bornu State Governor, Zulum, who spoke on Wednesday in an interview with Channels Television’s Sunrise Daily, said his stance was not tied to any political ambition.

The Governor,(Zulum) reiterated that he’s not nursing any political ambition of becoming the Vice-President of the country.