Pastor’s House Set on Fire by Youths over Missing Child 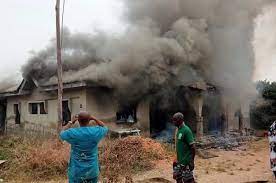 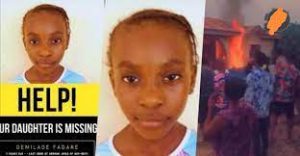 Demilade before her mysterious death

Some enraged youths in Ado-Ekiti, in Ekiti State, have set ablaze a pastor’s house over a missing seven-year-old girl.

The incident occurred at  Adehun Area of Ado-Ekiti in the early hours of Tuesday after the lifeless body of a girl identified as Demilade was allegedly found in the pastor’s residence.

It was gathered that the seven-year-old girl was sent on an errand and as waylaid and butchered by the daughter of the pastor who was said to be mentally unbalanced.

Demilade was discovered missing around  8. am on Monday on her way to buy pap for her parents and siblings.  The parents were said to have raised an alarm when she did not return home and could not be found.

The incident was reported at the nearby police station but the lifeless body of the girl was later found at the pastor’s house.