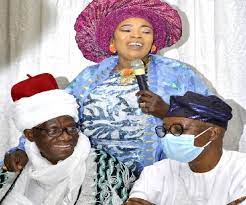 The Osun State  Governor, Adegboyega Oyetola and his amiable wife, Alhaja Kafayat, were at the Osogbo Central Mosque last Saturday to bestow honour on  Alhaji Abdul Yequeen Abimbade Adeshina,(his childhood friend)    during his installation as Saraki Adeen of Osogboland and three others.

The ceremony witnessed the who is who in Osun from far and near.

The event featured recitation from the holy Quran, lecture, royal blessing and prayer the Chief Imam of Osogboland Sheikh Musa Animashaun and Asiwaju  Musulumi of Yorubaland including  Edo and Delta, Alhaji Olatunde Badmus.

There was fundraising of N200nillion for the community’s cemetery Project.

Alhaji Adesina popularly called ‘Bade was decorated with a turban and received a certificate from Sheikh Animashaun at the event. He later went round to greet and exchanged pleasantries with guests at the high table