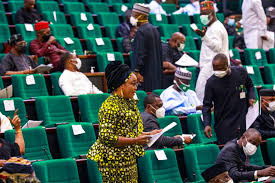 The Osun Online  Media Practitioners’ Association, OOMPA  on Monday hosts the only  Female Federal Lawmaker of the All Progressives Congress, APC, Honourable Taiwo Oluga at its September edition of Media Parley.

Oluga, who represents Irewole, Ayedaade, and Isokan Federal Constituency of Osun at the Federal House of Representatives according to a press statement signed by OOMPA Chairman and Secretary, Jare Tiamiyu and Tajudeen Hammed respectively, said, the lawmaker will interface with online journalists of Osun.

The statement explains that the Media Parley with the theme ‘’Digging into Politics, Governance and Dividends’’ is aimed at bringing public servants, stakeholders in the development of Osun and aspiring political office holders to narrate what they have done for the people, what they intend doing and more.

‘’Honourable Taiwo Oluga will explain to the good people of her constituency what she has done to better their lives since she became a federal representative and other plans lined up in order to ensure that dividends of democracy get to them’’, the statement said.

The statement further explained that the media parley interactive section will be streamed live on Facebook https://www.facebook.com/Osun-online-media-practitioners-108070858168939/ for the world to watch and contribute via the same platform.