NIGER DELTA MINISTRY: We are not Aware of Akpabio’s Resignation 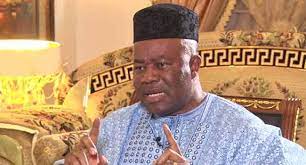 The Federal Ministry of Niger–Delta Affairs has said it was yet to be notified of the reported resignation of the Minister of Niger-Delta  Ministry, Senator Godswill Akpabio.

A Source  in the ministry who preferred anonymity because he was not authorized to speak to the press on the matter, said on Wednesday night in response to inquiries by Vanguard about Akpabio’s purported resignation.

The ex-governor was said to have tendered his resignation hours after  President Muhammadu Buhari ordered ministers who want to contest in the forthcoming elections to voluntarily vacate their positions.

However, the source said,’’ The ministry has no record of the reported resignation of the honourable minister from the government. ‘’We have not been briefed about any of such development’’.

‘’So,  we cannot comment at this moment on media reports suggesting the minister has left our ministry.

‘’However, if it is true, we’ll be duly informed before the weekends, and the ministry will inform  Nigerians and all Stakeholders’’.