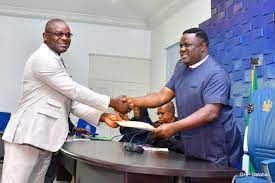 Akwaji, who is the first journalist to be so appointed, was at different times, Editor-in-Chief, the then-general manager of the State-owned Newspaper, The Nigerian Chronicle, and weekend Chronicle.

He has been a to-time Vice-President(East), NGE, and also Treasurer of the Guild; member, Standing Committee of the same body as well as one-time Secretary of the Nigerian Union of Journalists, NUJ, in Cross River State.

Until his appointment as Head of Service, Akwaji was Permanent Secretary, State Ministry of Climate  Change and International Development Corporation, MIDC.

Speaking at the swearing-in ceremony held at the Executive Council Chamber of the Governor’s Office, Calabar, Ayade commended the New Head of Service for a harmonious working relationship with commissioners of the various ministries, especially  Dr. Inyang Asibong, Commissioner for MIDC, where he served as Permanent Secretary.