Man Arrested for Brutalizing his Lover 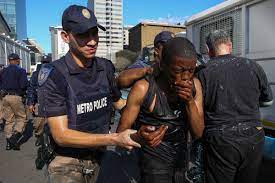 A Johannesburg man was arrested after he allegedly assaulted his sister’s daughter, who he was dating, leaving her blind for more than a week.

The incident occurred at a centre for homeless and abused women while she paid a visit to someone there.

The 30-year-old man was arrested and charged with assault with intent to cause grievous bodily harm after he handed himself over to the police on Sunday.

‘’It is alleged that the uncle assaulted his 25-year-old  niece (who is his girlfriend) at Usindiso Shelta,(on the ) corner  Albert and Delvers Street, on the 18th of March  2022, early in the morning.

The victim was enjoying herself  with some of her cousins when  he came and instructed her  to go and sleep.’’

‘’He dragged her to their room, where he assaulted her with a metal stick, burnt her with a  hot two-plate stove, and strangled her until she fainted,’’ police spokesperson  Captain Xoli Mbele said.

Mbele added that the woman’s cousin rescued her.

She couldn’t see for eight days as a result of her injuries.

The man is expected to appear in  the Johannesburg  Magistrate’s Court soon.