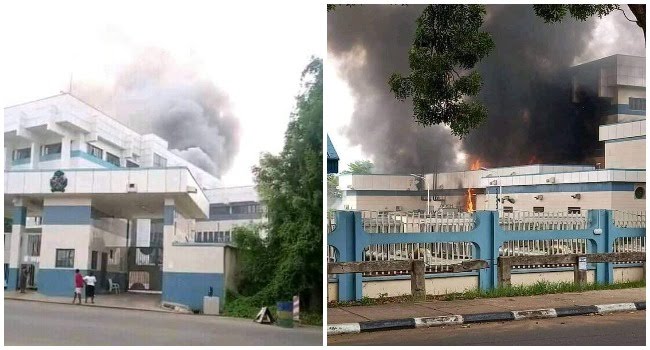 A section of the Central Bank of Nigeria (CBN) office in Makurdi was engulfed in fire on Thursday morning.

The inferno reportedly started around 7. am but was promptly put off by men of the fire service.

Although the bank is yet to make any pronouncement on the incident, sources say, the fire started in the building housing the power section.

“The fire started from the powerhouse and the security quickly called the firefighters who came to put it off; it did not spread to the main building”, the source said.

According to ChannelsTV, bank staff were seen hanging around in bewilderment discussing the incident at the time of filing this report.

Confirming the incident, the Benue State Police Command said it had deployed personnel to the bank to prevent any form of looting.

Anene Sewuese, spokesperson of the Command said although the source of the fire incident was not disclosed, the primary responsibility of the police, was to secure the bank against any form of breach.

The branch of the bank covers the North Central States.