INEC Sets For Osun Governorship Election, to Train Ad-hoc Staff Ahead of Time 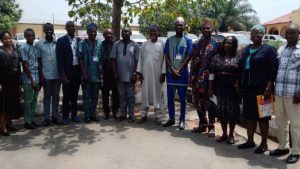 The Independent  National Electoral Commission(INEC)  has stated that it will soon commence training for its Ad-hoc Staff that will participate in the conduct of the 2022 governorship election in Osun State.

The Commission said the training of Corps members will start in their various Community Development Service(CDS) ground and will last for months before the election.

INEC also added that it’s ready to deploy registration machines to all wards across the State to ease the process of the ongoing continuous voter’s registration(CVR) ahead of the Osun State governorship election.

The Resident Electoral Commissioner in Osun State, Prof. Abdulganiyu Olayinka Raji said this on Tuesday in Osogbo, when he received the leadership of the Osun  Online Media Practitioners Association in his office.

The Association, led by its Chairman, Jare Tiamiyu paid a courtesy visit to the INEC headquarters to familiarize its members to the REC and to further strengthen the partnership between the election umpire and the media towards free, fair, and credible elections in July.

Speaking on its preparation towards the forthcoming governorship elections in the State, Raji advised residents of the State to take advantage of the ongoing continuous voter registration to register or transfer their permanent voter’s cards to new polling units near their residents.

He said the commission has created new polling units in Osun State to reduce the population of the voters in units with large numbers of electorates.

‘’’’ By the end of March, we’re going to end the continuous voter registration in the State. But by the last week of March, we shall deploy more machines, at least one per ward. We want people of the State to use the window of the CVR to register or transfer to polling units closer to their residence. The new polling units were created to decongest polling units.

‘’Also, unlike before when we would start training for our ad-hoc staff days to elections, we shall be commencing training for corps members who constitute a larger percentage of our ad-hoc staff from May. This will help familiarize them with our machines  and reduce  the failure we do  record on Elections Day.’’

The Commissioner commended the media Practitioners for their support to the Commission, calling for more partnership before, during, and after the governorship election in the State.

Earlier in his address, the Chairman of OOMPA assured the Commission of the readiness of Online news publishers to partner with the Commission towards free, fair, and credible elections. He also stated that the association will love to work hand-in-hand with INEC on four cardinal points, all pointing towards having credible and peaceful polls.