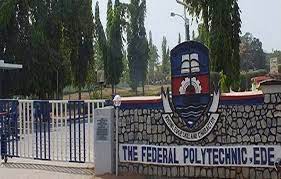 The Management of  Federal Polytechnic, Ede, in Osun State has debunked the report of increment in school fees for all students of the institution.

The [Protocol, Media and Public Relations Officer of the School, Mr. Sola  Lawal, made this clarification in a statement on Sunday in Osogbo.

Lawal described the allegation  As baseless and callous.

The Spokesman of the citadel of learning said the allegation that the management of the school increased school fees by one hundred percent was not true.

According to him, the increment in school fees is for new students that are due to resume in June, and the increase was by only thirty percent.

Lawal said the old students were not in any way affected by the increment.

‘’The  misinformation that one hundred percent increment  was made for all students is not  only unfounded  but wicked  and unthinkable.’’

‘’As a matter of fact, the Polytechnic  portal has correct school fee structures  for all levels  of students.’’

‘’’ Indeed , we  are not unaware  of the unfriendly  economic season  that is why  the increase was  pegged at thirty –percent.’’

‘’Even at that,  it is still the lowest in the zone, and only for those that are coming in, newly.’’.

‘’The simple analysis of the pattern of payment is those old students that are paying N32,000 will continue paying b the amount till graduation,’’ he said.

Lawal said there were, however, wide consultations with critical  stakeholders, including student union leadership before the final approval of the 30% increase in new students fees by the Governing council.