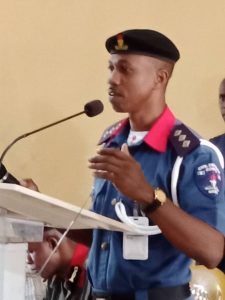 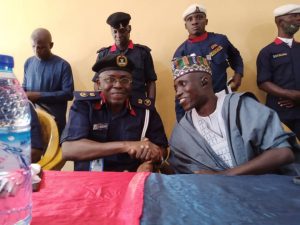 History was made yesterday, Thursday 24rg June as an achiever, a role model, an epitome of humility, a visionary leader, an astute administrator, a giver, more of a friend than a boss, the immediate past Commandant of Nigeria Security and Civil Defence Corps, Osun State Command, CC Abdul Kadir Alao Sulu was sent forth to greater heights with pomp and pageantry.

The short but meaningful and unprecedented record of Commandant Sulu which was described by all those who witnessed the epoch-making event shall remain a reference point for a long period of time in Osun State Command he has set a standard that future Commandants would try hard to surpass.

ACG Adeyinka who could not hide his feelings danced to the melodious songs played by Osun NSCDC band unit. He said Commandant Sulu’s humility is second to none, adding that his legacies and conduct are truly appreciated. ACG Adeyinka Fasiu also said good deeds follow good people while bad deeds follow bad people. He appealed to everyone in attendance to borrow a leaf from Commandant Alao Sulu’s character, as he has left his mark on the sands of time in NSCDC Osun Command.

While delivering the keynote address, the 2ic of the command, Deputy Commandant Ibrahim Atanda, the chairman organizing committee stood in for Commandant Emmanuel Ocheja who was away for some urgent State matters, rolled out an endless quality in CC Abdulkadir; he described him as a fantastic boss, humane leader, a true achiever, more of a friend than a boss.

While given her own recommendation, the Chairperson of Private Guards Company in Osun State, Chief Mrs Mobola Odebode Lawal said she had witnessed countless send forth ceremonies in NSCDC nationwide, the one organized for CommandantSulu happened to be the best.

Among officers who attested to the administration of the Commandant in Osun Command were:

They described CC Alao Sulu as a father, a generous giver,  humility personified, a teacher, an editor, a caring boss, a transparent man and many more.

In his response, the immediate past Commandant ascribed glory to God for everything and appreciated the Commandant General, Dr Ahmed Abubakar Audi( mni) for the privilege given to him to serve as Osun State Commandant.

He said it was his plan to lead officers and not to rule them, knowing fully well that it is easy to lead educated ones than ruling them.

He appreciated the command for cooperation enjoyed while leading them, as it made his work easier. CC Sulu appealed to those whom he might have stepped on their toes while in the command to forgive him. He assured everyone that he is a part of Osun NSCDC big family.

The programme was accompanied with plague presentation by the management and various gifts from management, divisions, departments, units Private guards company, individuals, notable among the gifts was the groundnut presented by the popular groundnut seller in the command.

The ceremony was rounded off with a vote of thanks by Ondo State Commandant, CC Ahmed Abodunrin. He appreciated all officers for organizing the programme and admonished them to strive higher in their careers, adding that the higher they go the hotter it becomes.

Commandant Abodunrin who appreciated CC Sulu for making himself accessible to all officers and men advised superior officers to emulate CC Sulu.

The send forth also featured the dynamic Osun NSCDC band as they added glamour to the event, D.J Petepete was also on ground and the indefatigable Public Relations Unit did a big job to make the event a huge success.