Bamidele Salami: The Heart-Beat of His People 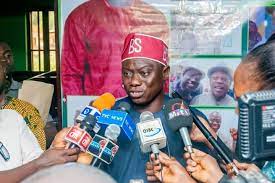 The guest for the occasion, Hon. Bamidele Salami took the microphone to catalogue his accomplishments since he began representing his people of Ede North, Ede South, Egbedore   and Ejigbo Federal Constituency.

The political stalwart, Hon. Salami, beating his chest rendering accounts of his stewardship to his people in all the four local governments under his jurisdiction mentioned a lot of life-touching projects he had executed since he has been in the saddle of leading his people, among which are the introduction of micro-credit financing, which has encouraged entrepreneurship among the indigent women in the constituency.

‘’ I have encouraged enterprising and entrepreneurship with the micro-grants scheme, whereby I personally  disbursed funds to a number of women traders to support their business ventures.

In a question put to him on what he has been doing since his  Party, the People’s Democratic Party(PDP)  lost the 2015 elections to the opposition, the All Progressive Congress(APC), he says he has not rested on his laurels as the representative of his people. ‘’ In the house of representatives, I have moved a motion for eleven(11) bills to be passed into law. While some have seen the light of the day, some are at their second readings.

Not only this, in his words’’ the best empowerment is the empowerment of the brain’’. I have organized and empowered the unemployed youths in my constituency in the areas of Information Communication Technology(ICT), Fashion Designing, Agriculture; and also built and delivered three(3) blocks of classrooms’’.

To alleviate the suffering of his people, Hon. Bamidele Salami says,’’ I have provided for my people at Jagun Jagun Ward Solar-powered boreholes to put an end to the headache of queuing in the sun to fetch water for domestic use.’’

While the event lasted, the homely but industrious lawmaker could easily be classified as a political aficionado, who could be trusted in a position of authority because the people at the grassroots matter a lot to him.