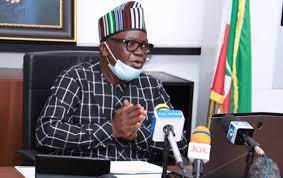 The Inspector General Of Police-IGP, Usman Alkali has announced the arrest of 10 suspects allegedly involved in the aborted attack on Governor Ortom of Benue state.

Usman  Alkali, when briefing the State House Correspondents at t6he Presidential Villa, Abuja on Thursday said, the suspects are being detained by the police without prosecution because of the industrial action by the judiciary staff.

According to the IGP, investigation so far indicates that the revelation is contrary to Governor Ortom’s claim to have been attacked by herdsmen on his farm along Makurdi-Gboko Expressway in Benue State.